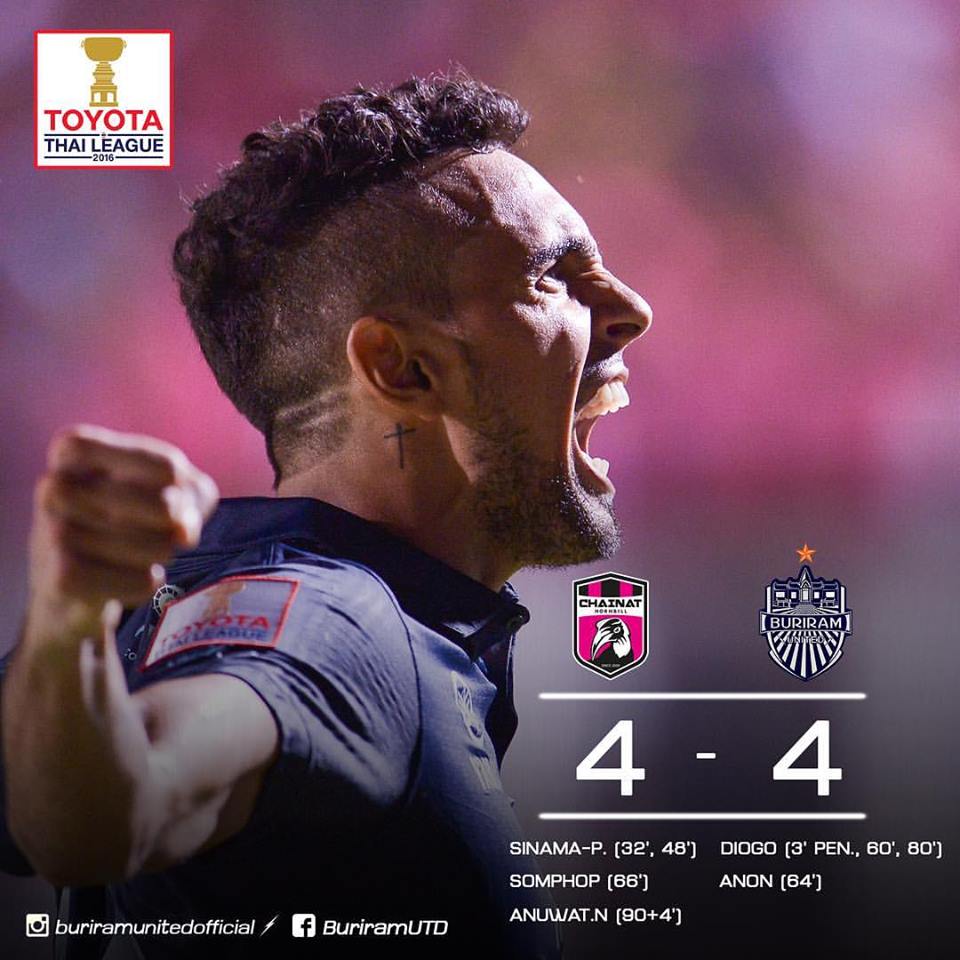 An excellent free-kick from the Chainat skipper gave the home side a dramatic stoppage time equalizer to deny Buriram the three points. But there was controversy surrounding the leveller as the fourth official signalled four minutes of stoppage time but the “offence” took place after five and a half minutes.

It was hard on Diogo who hit an excellent hat-trick, the second and third goals being of the highest quality. In fact, other than the obvious early penalty, the officials did little to help Buriram’s cause with two dreadful, important decisions.

The first was when Kaio was clearly stamped on, right in front of the assistant referee but despite the furious Brazilian showing the red marks on his body, the officials were not interested.

The second was for Chainat’s third goal when scorer Somphop thundered into Koravit’s back like a steam train as he headed in a corner, leaving the defender dazed and confused on the floor.

However, there were many concerns to arise from last night’s performance. Chainat are struggling at the bottom of the league, having only scored 31 goals from 25 games before this one. Yet they gave Buriram’s shaky defence plenty to think about.

Buriram’s first-half showing was dreadful. The midfield totally lacked ideas and Kaio was yet again inefective. It was only when Anawin was introduced that Buriram began to look dangerous and also when Chitpanya FINALLY came on.

Why the management left him on the bench AGAIN, and against his old club, is a total mystery. The pass he supplied for Diogo to score the fourth goal was sublime and the only other player on the pitch who also has the vision to do something similar, is Diogo himself.

Buriram’s reluctance to start with Chitpanya may well have cost the young midfielder the chance to join the national team for the World Cup qualifiers coming up. I fear this will be Thailand’s loss.

The defence was once again uncertain, with Chitipat something of a liability, particularly for the first goal. However, they are coming under a lot of pressure due to the midfield’s inability to retain possession , the main playmaker being on the bench doesn’t help.

Buriram made the perfect start in the third minute when Jakkaphan crossed from the left and Kaio was hauled to the ground by a defender. It was a clear penalty , though it was a bit of a surprise when Diogo stepped forward instead of Tunez.

I know the big defender missed his last penalty but he is usually coolness personified from the spot. Diogo took only three paces and put a weak shot to the keeper’s right but he could only help it into the net. Fortunate !

Diogo should have made it two in the sixteenth minute when following an excellent left-wing cross from Anon, he headed it down into the ground and the ball bounced over the bar.

A minute later came the Kaio stamping and Jakkaphan received a yellow card when play restarted as he administered his own retribution on the offender. Unprofessional, yes. Understandable, also yes.

Tunez also received a yellow for an unnecessary pull-back ten minutes later, though he had come to Buriram’s rescue shortly before when he thumped the ball away when Siwarak failed to hold onto a low shot.

Chainat then drew level in the thirty-second minute when following a diagonal ball in from the right, Chitipat allowed Sinama-P to latch onto it and flick it wide of Siwarak from ten yards.

Two minutes later Diogo received a yellow card when he reacted to a bad challenge by TAPPING the offender on the head who then dropped pole-axed to the ground. Not good to see, but at least the referee got that one right and booked the aspiring actor.

Five minutes from the interval Buriram replaced Nookoolkit with Anawin and immediately after, a low Kaio shot came back off the keeper to Diogo, only five yards out, but the striker could only hit the keeper again with an unconvincing shot when he really should have scored.

Buriram brought on Moreira for Kaio for the second-half but were stunned when the home side took the lead in the forty-eighth minute. Tunez failed to get any distance on a clearing header and the ball was played through for Sinama-P to lift the ball over the advancing Siwarak.

Three minutes later Siwarak made a great save , turning a fierce shot over the bar following a quick free-kick.  Then, Buriram levelled on the hour with a stunning Diogo strike.

He collected the ball out right and Anawin’s run took two defenders with him, allowing the Brazilian to turn inside and smash a tremendous left-foot shot high into the net from twenty-five yards.

Buriram then stormed into the lead with another fine goal in the sixty-fourth minute when Diogo sent Anawin on a run to the byline down the right . He looked up before pulling the ball back for Anon to coolly pick his spot from the edge of the area.

The lead lasted only two minutes when Chainat equalized with that controversial Somphop header. The home side almost took the lead four minutes later but Tunez got in an incredible block to divert a goal-bound shot for a corner.

Buriram finally brought on Chitpanya for the disapointing Sieghart in the seventy-seventh minute and the midfielder immediately showed his class three minutes later when he threaded a superb diagonal ball into the box for Diogo to seize onto and take it to the left before rounding the keeper to finish. Superb stuff.

Moreira then had a great chance to seal the three points when a lovely through ball found him onside and clear but he inexplicably allowed the ball to run out of play.

Narubadin then was shown yellow before Siwarak made a good save, diving low to his left in stoppage time. With added time being extended, Chainat were awarded a fortuitous free-kick , twenty-five yards out. Anuwat.N stepped up to send a great low shot round the wall and into the corner of the net, despite Siwarak’s despairing dive.

Frantic stuff and it’s always hard when you concede so late, but on reflection maybe a draw was a fair result.