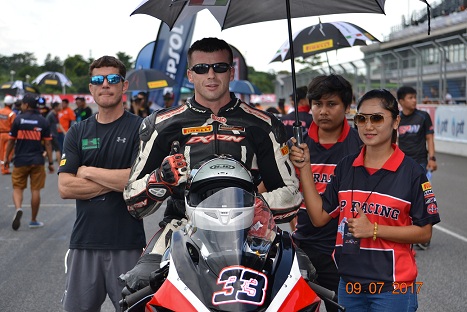 Mixed fortunes for our two local favourites at the Buriram circuit on Sunday.

We had a total of nine races to enjoy on Sunday at the Chang International Circuit with each proving extremely exciting for a very good crowd who turned out to spectate.

The only real incident was the downpour of rain that occurred in the 3rd race of the day which saw many riders slide off in the wet conditions which brought out the red flags after 4 of the 7 laps had been completed. However when the rain stopped the trackside staff went into action removing the surface water to allow the race to be re-started and the meeting to continue.

Colin and I met up with our two local farang riders and this is how their weekends panned out.

Colin’s first race on his new bike after having previously ridden a BMW 1000cc in Superbike 1, saw him spend a lot of time setting up the bike this weekend to be competitive. He was rewarded with a 4th in qualifying &amp and 4th place in his race.More to come from him once he has his new bike dialed in correctly. 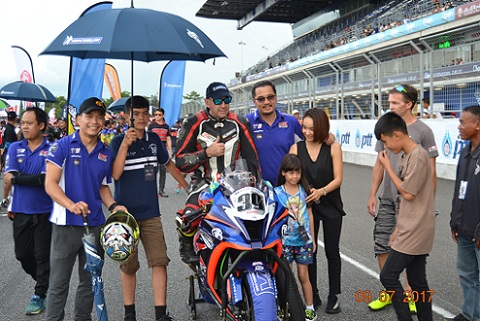 Gary had a great day on Saturday getting pole position in wet conditions. His first pole in his first full season of racing and he was hoping for rain to be around on Sunday to put his grid position into a good finishing position in the race. It however stayed dry for his race after the earlier rains. He got off from pole very well but on the first corner was pushed wide and off track which left him dead last in 25th place.He made a great recovery over the 10 lap race to pass 13 riders and gain him a 12th position.

He had two or three races last year and this year his riding has improved immensely to get this sort of result.Gary attributes this to the riding training and bike preparation he has had from Ben Reid of BRP racing. 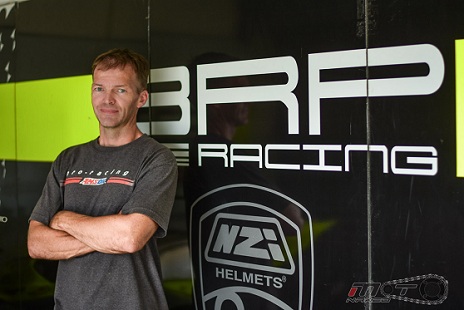 Australian Ben was a former world champion 250cc rider and now runs his training schools in Thailand helping up and coming riders.

Next week Colin and Gary race in Pattaya at the Bira circuit, we will update you on that event.