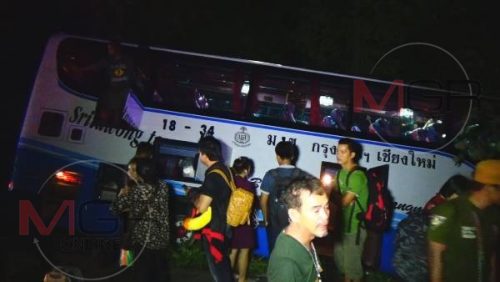 A tour bus driver on the Bangkok to Chiang Mai route said he told his bosses that there was a problem with his vehicle but they told him to continue nevertheless.

There were many passengers who needed to complete their journey before repairs could be carried out, he claimed he was told.

When the bus got to a bend on the Kamphaeng Phet to Tak road the driver said the steering wheel would not respond. He braked desperately but the bus – with 39 aboard – slammed into a roadside tree.

Police and medics at the scene treated several for injuries and five were taken to hospital.

Driver Narongwit Withayakun, 53, told police that the service was between Bangkok and Chiang Mai run by Sri Thawong Tour. It left the capital at 3pm.

He relieved the first driver at Salokbat at 10.30pm and said he immediately reported to the company that the vehicle had a problem.

He claimed he was told to carry on as it was a busy time with lots of travelers.

“Then this happened”, he said. “I entered the bend then the steering wheel would not respond. I applied the brakes but lost control and went into the tree”.

Kamphaeng Phet police are mounting an investigation into the accident.