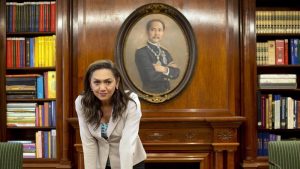 As Pinit Ngarmpring, he was a CEO and sports promoter, well known in the world of Thai football. Now, under her preferred new name of Pauline Ngarmpring, she’s pursuing a bid to become the country’s first transgender prime minister.

The 52-year-old is one of three candidates put forward by a political party for the post in next month’s general election.

She says she wants her nomination to bring hope to the marginalised and open up political space for future generations of LGBT+ people.