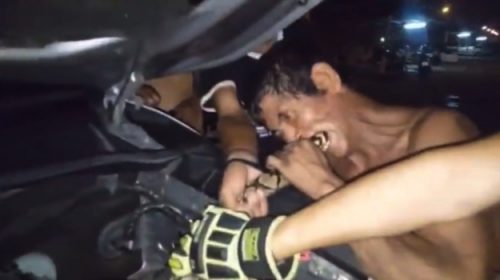 Python is bitten on the tail by Cambodian man. (Photo:Khaosod)

A Cambodian man volunteered to help out Thai rescuers catch a python — using the bizarre method of biting the serpent’s tail — after the Thais had spent three hours yanking on the snake that went hiding in a car’s engine without success.

Early yesterday morning, rescuers in Samut Prakarn responded to a call from the security guards of Thai Central Chemical Company, who found a python hidden in the engine of the company’s pickup truck.

But the snake kept crawling away from the rescuers and wrapped itself tightly around the car’s undercarriage, so a migrant worker employed by the company, identified only as “Rathit,” stepped in to help. He said it was an ancient Cambodian method to bite on the serpent’s tail several times so it would let go.

While we absolutely cannot vouch for its Cambodian origins, the tail-biting technique worked in the end, as the snake gave up, and Rathit pulled it out from under the car.

But our Cambodian hero wasn’t through. As the snake dropped to the floor and attempted to slither away, it was Rathit who casually grabbed it by its tail and placed it into a canvas bag for the animal rescue squad.

And don’t worry. The serpent was released back to the wild, unharmed apart from a sore rear end.
(Source:-Coconuts,Bangkok))