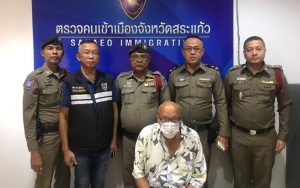 A Canadian pensioner told Thai immigration police that he sneaked into Thailand through a hole in the fence.

He was arrested while trying to go back into Cambodia.

Robert Fortin, 67, was found to have no Thai entry stamp in his passport.

He told a convoluted and changing story that Thai immigration officers found hard to believe, said Naewna in its report.

He said that he had been ushered over the border behind the Rong Kleua market in Poi Pet through a hole in the fence. He said he came with a Cambodian “agent” whose name he did not know.

He paid the agent 5,000 baht to get a Thai entry stamp, he claimed. The agent took his passport and then contacted him to say he had got the entry stamp and he was free to go back across the border.

Fortin said he didn’t realize there was actually no such stamp in his passport.

He is now in the cells at Klong Leuk police station on illegal entry charges.

Naewna did not report on where the suspect lives.