Casinos To Become Legal In Thailand After Election ? 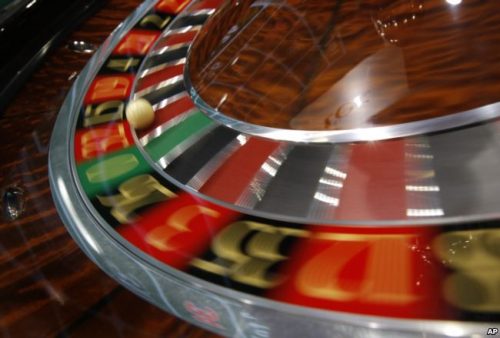 More than 80 years after Thailand introduced gambling laws, analysts say the nation is betting on legalizing casinos in hopes of boosting tourism and being a player in regional casino development. Gambling in Thailand is officially banned, apart from the state-run lottery and betting on horses at the Bangkok Turf Club; but, illegal betting and underground casinos have proliferated.

Visanu Vongsinsirikul, a lecturer in economics at Dhurakij Pandit University, and a specialist in the gaming industry, said a decision on casino gambling is likely after the next general elections, expected in late 2018.

“After the election this issue [of the casinos] will be raised again. When the election passes it means the government has the rights of the [electorate]. So the government will dare to make a decision about this. I’m quite sure that Thailand will have a legal casino, they will have in the near future,” Visanu told VOA.

A series of governments over the past decade set out plans to legalize casinos. Former Prime Minister Thaksin Shinawatra led an initial plan to legalize a casino in Pattaya before he was ousted by the military in a 2006 coup. Since 2014, the proposals have been given fresh momentum, with backing in 2016 from senior government and police officials. Current Prime Minister Prayut Chan-o-cha has expressed caution over the plans.

Visanu said initial planning has placed at least one major casino resort in the greater Bangkok area with another expected in the resort destination of Phuket Island in southern Thailand.

Rattaphong Sornsuphap, from Rangsit University’s College of Social Innovation, said a priority for any government will be to ensure oversight and transparency in the management of any casino. 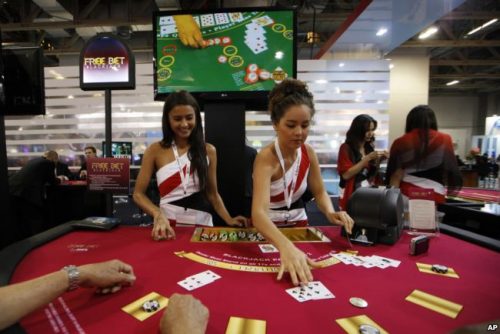 In this May 23, 2013 photo, Attendants conduct play with the visitors over a Black Jack gaming table during the Global Gaming Expo Asia in Macau. Macau is in the midst of one of the greatest gambling booms the world has ever known. To rival it, Las Vegas would have to attract six times as many visitors essentially every man, woman and child in America. Wynn Las Vegas now makes nearly three-quarters of its profits in Macau. Sands, which owns the Venetian and Palazzo, earns two-thirds of its revenue there. (AP Photo/Kin Cheung)

Research by Rangist University says up to 10 underground casinos had been operating in the greater Bangkok area prior to the military takeover in 2014 with annual gross income between $5 billion and $5.6 billion annually. Sungsidh Piriyarangsan, dean of Rangsit’s College of Social Innovation, has been quoted as saying tax revenues alone could reach $2.78 billion once casinos are legalized.

Rattaphong said that from the major casinos operating across the Greater Mekong region – with Malaysia and Singapore included, total revenues were estimated at almost $50 billion in 2015, up from $34.2 billion in 2010.

Rattaphong said at least 32 major casinos are operating along the border with Cambodia, Laos and Myanmar.

The regional casinos are a regular draw for Thai gamblers, as the establishments even offer buses to pick up players from the capital, Bangkok, and transport them to the Cambodian border town of Poipet, just over two hours away.

In 2015, Thai analysts said senior representatives from U.S.-based Las Vegas Sands, operator of the Marina Bay Sands Casino in Singapore, held high-profile talks with members of the Thai government and offered to spend up to $6 billion on a 450-room entertainment and casino complex in central Bangkok.

Dhurakij Pundit University’s Visanu said past research has focused on three existing regional models that could be adopted for the Thai market.

These include the style of Malaysia’s integrated resort at Genting, of the Singapore model evidenced by the Marina Bay Sands Casino, or a style similar to casino developments in Macau, which has several entertainment and gaming venues.

A spokesperson for the Singapore-based Marina Bay Sands casino told VOA in email comments the casino operator was monitoring the situation in Thailand. Researchers say based on recent surveys, there is a growing trend among Thais backing the casino reform legislation.

A senior academic, who asked not to be named, said any official moves to legalize casinos will require the full support of the most senior members of the Thai government.

He said there was also some reticence among members of the Thai public over the plans and the need to ensure transparency as well as for income generated from the casinos to be used for social welfare benefits to win public backing.

Thailand’s booming tourism sector, with more than 30 million visitors annually, including some 10 million from China, is a target market for the casino and leisure industry.