Childhood Bill Could See The End Of Exams For Young Children 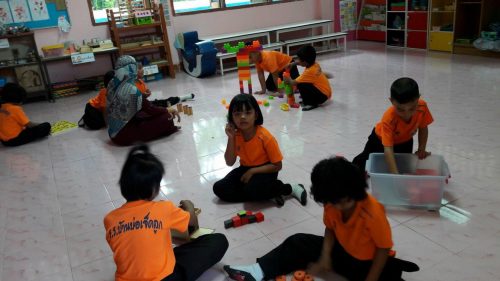 If the Early Childhood Bill sails through the National Legislative Assembly (NLA) this year, young children will be able to say goodbye to exams.

“We hope it will be legislated in time for use in the 2019 academic year,” Assoc Professor Daranee Utairatanakit, a member of the Independent Committee for Education Reform (ICER), said in a recent interview .

The National Education Reform Commission is set to consider the draft law tomorrow, after which it will be forwarded to the education minister, the Cabinet and then the NLA. Before it goes to the Cabinet, opinions from stakeholders including parents will be gathered.

The bill defines children of early-childhood stage as foetuses through to children aged eight years old – making a big change to the now-used definition of children aged between three and six.

“Human brains have developed the most during our newly-defined early childhood,” Daranee said. “Before the age of eight, children have not yet stepped fully into the world of reality.”

She said the Early Childhood Bill was drafted with the aim of laying down a firm foundation for children, which will be useful to lifelong learning.

To prevent children from unnecessary stress and the loss of self-confidence, the bill is expected to bar schools from testing children during the enrolment process and also to ban exams for students from Prathom 1 to 3 levels. Primary schools that organise entrance exams will face a fine of up to Bt500,000 if the bill becomes law.

Many parents have enrolled their children in tutorial classes at a very young age in the hope of equipping them with various skills, academic knowledge and the opportunity to enter the country’s most prestigious schools.

Some children have been forced to prepare for exams for entry to top primary schools at the age of just two-and-a-half.

Many parents have also enrolled their children in 300-hour tutorial courses as they come close to sitting exams for renowned primary schools such as demonstration schools. These courses cost about Bt160,000 per head.

Daranee said such practices could do more harm than good.

“At such a young age, children should be allowed to learn with fun and develop naturally based on their potential,” she said. She said the focus on children’s ability to read or write as well as to understand academic knowledge could take place at a later stage.

According to Daranee, the bill seeks to ban exams during the early-childhood stage so as to protect children.

“Those exams are prone to imposing way too much pressure on children. So many Prathom 1 students are in fact not yet ready to sit in classes, even though they have good intellectual intelligence. They are unhappy in classrooms, affecting their abilities to learn and hurting their self-confidence,” Daranee explained.

She said many children became disappointed when they could not successfully pass exams to famous primary schools, because of their parents’ expectations.

Daranee said many of these disappointed children had better potential than those who learned to study well at a young age.

“I must emphasise that when children are happy, they will be capable. When parents don’t try to dictate to them in all aspects of their life, children will naturally learn to solve problems on their own,” she said.

Although the Early Childhood Bill will not force a ban on tutorial schools for children aged under eight, it should still be able to end the practice, she said.

“When there are no competitive exams for kids, no one will want to put their children in tutorial classes,” she said.

Last year, a five-year-old pupil developed clear bruises after a teacher at a tutorial school hit him for failing to live up to the school’s expectations. The school is known for having produced several successful applicants to a top demonstration school.

“This reflects the pressure that these types of courses have imposed on young children. Stress negatively affect their brains,” Daranee warned.

She said the Early Childhood Bill was not impractical, as it would push for the establishment of a policy committee that would determine how schools could recruit students without sitting tough tests.

“We do offer flexibility. But in essence, if this bill is introduced, there will be no gruelling exams for young children,” she said.

Times comment:- This would be a big step forward in the development of education in Thailand. Very young children should not be subjected to the examination process as it puts unnecessary pressure on them and also “pigeon holes” them far too young.

Children develop at different rates, particularly in the early years and they should be allowed to do so at their own pace. One thing that did concern me in the article was the inference that learning to read and write would not be a priority until later. Children should still have the opportunity to develop these skills but without having to face tests to determine who is “the best”.