Come One Come All! Thailand’s Tourism Top Brass In A Show Of Confidence 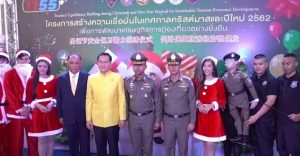 Come one come all! Thailand’s tourism top brass in a show of confidence.

Thailand’s tourism “A-listers” turned out in force in Bangkok yesterday to kick off a campaign aimed at creating confidence among tourists for the Christmas and New Year period.

On BJ’s right was president for the occasion Weerasak  Kowsurat, Minister of Tourism and Sports, dressed in fetching yellow.

On his right was an unnamed person who looked more like the “Grinch of Christmas” as he had unfortunately forgotten to smile.

These were flanked by a couple of attractive Thai ladies posing as Santa’s helpers and a couple of young men in flimsy white beards who barely made the frame.

Completing the line-up was a wide-eyed puppet of a policeman and three black-clad puppeteers.

The rank of the puppet was not mentioned in the INN Network article.

The message was repeated in slightly larger and more prominent Chinese words.

Following this Khun Weerasak went walkabout among the throngs – 1,500 officials and volunteers from the Metropolitan police, drugs suppression, immigration, the Ministry and Bangkok Metropolitan Administration had been invited to the party.

There even appeared to be some tourists though this could not immediately be confirmed.

Also at the gathering was national police chief Pol Gen Chakthip Chaijinda who was seen giving some words of advice to his underlying Big Joke.