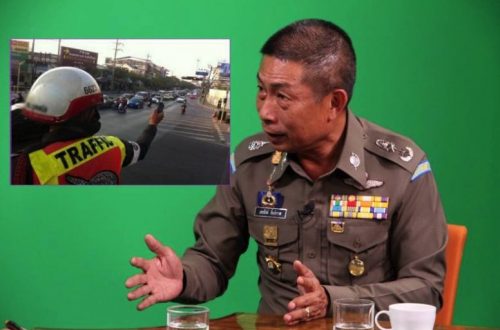 The senior policeman tasked with the reform of penalties and procedures for driving offences has told the Thai media of yet more plans for the future.

One is to publish a list of sacked officers each month.

Instead there will be a points system with double points being deducted for those who don’t pay their fines.

Maj Gen Ekkarak also promised that officers found guilty of extortion and taking bribes would be sacked. He said that a list of those dismissed from the force would be published each month.

He also said on Friday that there would be far greater penalties for drivers fleeing the scene of accidents and racing on public roads.

He also commented on the issue of the combining of two 1979 laws regarding driving licences that will see the penalty raised for not having one to 3 months jail and 50,000 baht.

He said the large figure was up to the courts and was really a scare tactic to persuade people to get a licence.

He said that 10 million Thais do not have licences and it is high time that they are in the system.

Of that number 8 million are motorcycle riders and 2 million car drivers.

Maj Gen Ekkarak added that there is also a review of how police officers are rewarded for getting fines.