Is This The Cruelest Mother In Thailand? 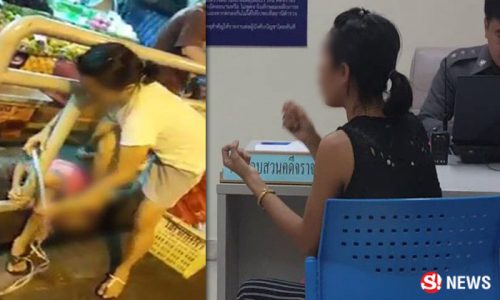 Mother tying her son up and being questioned at police station.

Police in Nonthaburi have arrested a woman seen tying her son to railings with a plastic cord.

During the incident which was caught on film, the woman can be seen holding the child’s head down with her foot, while attempting to wrap the plastic cord around his arms and body.

The young boy who is around 11 years old can be heard crying out in pain, saying, “I’m hurt, I can’t breathe.”

Police became aware of the incident, which happened outside a temple close to the Pak Kret market, after the footage was uploaded to the YouLike Facebook page where it has been viewed more than 3.6 million times.

An officer from Nonthaburi police confirmed the woman had been arrested, saying that she had “a bad heart.”

He said that while the person who took the video may not have done anything to stop the incident, recording the footage meant that police were able to act quickly and arrest the woman.

Under questioning, the woman admitted her behaviour was unacceptable but said she wanted to punish her son for stealing money from her so he could play games at an internet cafe.

Police confirmed the woman will be prosecuted and that officials from Department of Children and Youth, as well as local social workers are also investigating the incident.

People commenting on Facebook branded the unnamed woman “vile” and “cruel” and said she was not fit to be a mother, while others questioned her sanity and said she could be suffering from mental health problems.