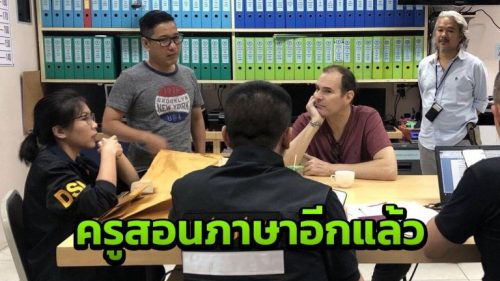 Police in Bangkok have arrested a British man who is teaching at a language institute in Bang Khae.

Obscene images of children were found on his computer and phone.

Police allege he was advertising and sharing the images on Craigslist.

He is in custody at Bang Khun Thian police station following the serving of a search and arrest warrant in Phasi Charoen district yesterday.

DSI and CSD police became suspicious after monitoring Craigslist. They say Mr Bennett put out an advert looking for partners who were women who had twelve year old children.

They sent a sting email and in reply were sent indecent images of children, they said.

They called him a potentially dangerous individual who needed to be stopped.

This led to the issuing of the Thanyaburi court warrants and the raid on the suspect’s room in Mind Mansion, Soi Therdthai 66, Phasi Charoen, Bangkok.

Taken into evidence was a computer notebook and a phone. Police said there were a lot of indecent images of children on both.

Mr Bennett denied advertising and spreading child pornography saying the images were for his personal use.

Police said that the suspect is a language teacher in Bang Khae.

The website involved was “carcklist.co.th” that we understand means Craigslist.