Diogo Back On The Goal Trail With Hat-Trick At Navy

Buriram hit four in an entertaining game which saw Navy play their part, hitting the woodwork three times. The picturesque ground was almost full, with the traveling Buriram support providing a great atmosphere.

It really is a very enjoyable experience going  to a Buriram away game, the fans are totally unique. It was difficult for me to miss most of England’s victory over Sweden but I made the right decision.

Chitipat came into the side at right-back with Pansa moving to the left. This allowed Junsoo back into the midfield where he clearly belongs. Osvaldo was on the bench with his hamstring injury not being as bad as initially feared.

Navy almost rocked Buriram in the 7th minute when Pansa stretched to intercept a ball into the box but could only divert it straight to a Navy forward but Siwarak reacted quickly to make a superb block.

Buriram took the lead two minutes later when Junsoo drove into the left side of the box and was felled from behind. It was a clear penalty and Diogo made no mistake from the spot.

It was two in the 15th minute when neat interplay wide right between Supachai, Narubadin and Jakkaphan saw the latter cross for Diogo to bury a downward header. 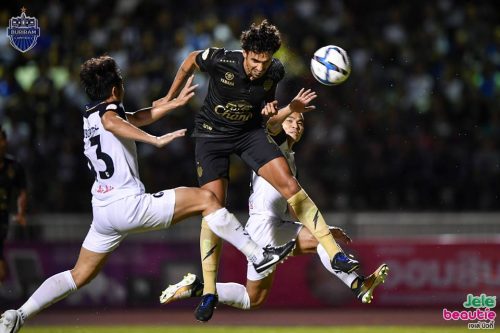 Diogo was reveling in being played in a more central role and he got clear in the 37th minute but the keeper made a good save. Navy then came close a minute later when a low shot was diverted against the post by Chitipat.

Still, it was Buriram who were looking far more dangerous and they thoroughly deserved their two-goal interval lead. 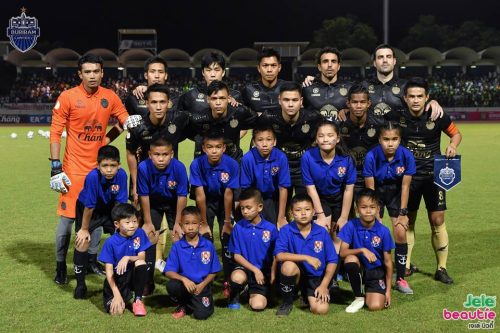 Buriram continued where they left off but were almost caught out in the 54th minute when Siwarak could only watch as a right-wing cross struck the crossbar. Almost immediately Buriram hit back and Jakkaphan played Narubadin in with a delightful pass but he fired over the top.

However, the third goal duly arrived in the 55th minute when Narubadin crossed from the right for Diogo to cleverly pull away from his marker and bury a low shot at the near post.

Further Buriram pressure saw them awarded a free-kick wide left in the 65th minute which Jakkaphan delivered to the far-post for Tunez to head down and back to Pansa. His first touch was excellent giving him the space to fire a low shot into the corner of the net.

Navy kept plugging away ,looking for the consolation goal they deserved but were denied by the woodwork for a third time in stoppage time.

A very enjoyable match and like I said earlier, it’s always a pleasure to join the Buriram “family” on an away jaunt.

On the pitch, Buriram got the ball wide as often as possible and were particularly dangerous down the right, demonstrating  how much they had missed Narubadin. Jakkaphan was excellent throughout, showing what he is capable of. We just need to see it more often.

It was a great weekend for Buriram with Pattaya winning 2-1 at Bangkok United, Thai Port drawing 2-2 at home with struggling Sukhothai and Muang Thong being held 0-0 at Ubon.