Doctor Campaigns To Save The Mekong Rapids 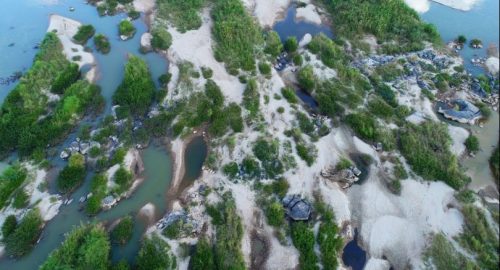 In a previous article we outlined the government’s plan to blast the Mekong rapids to make the river navigable for larger shipping. Now a doctor is waging a one-man-campaign to halt the plan.

The rocky shoals and rapids of the Mekong River are magnificent when viewed close to, but seen from the air they make a meaningful statement about the greatness of this river that rises in the Tibetan plateau and winds its way through China, Myanmar, Laos, Thailand, Cambodia and Vietnam.

It is this statement that medical doctor and keen environmentalist Sommai Eiawpradit is attempting to spread as he continues his photography of the mighty Mekong from a drone and shares them with hundreds of others on social media.

“My intention is to let other people see what I have photographed with my drone so they realise how beautiful and significant the Mekong River rapids really are,” says Sommai, a doctor in Chiang Rai’s Chiang Khong District. 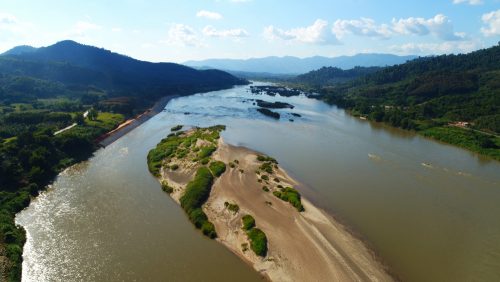 Sommai explores the Mekong using his drone to capture the riverscape. Last month he again spent his free time taking pictures, this time of the rocky rapids in the Mekong River including the famed Khon Phee Lhong rapids in Chiang Khong, which could soon be destroyed if a multilateral project has its way.

The Lancang–Mekong Navigation Scheme project, which aims to improve the river’s navigation route and allow barges larger than 500 tonnes to travel along the river all year round, was approved by the Thai cabinet at the end of last year.

Seen from the sky, the river and its rapids are very distinctive compared to the scenery seen from the river bank or on the boat. The wide chain of rocks that make up the rocky shoals can be seen in their entirety, as can other features of the rapids such as vegetation and sand dunes.

Sommai, who is using the photos to set up a digital database, says he likes the drone because it offers a wider view and much clearer detail, especially when matched with the satellite photos. “So this is best way to capture the entire picture of the great rapids of the Mekong River,” he says.

His photo collection of the rapids not only displays scenery that few people have ever seen but also shows the complex ecosystem and strong bond between the rapids and the geography of the river.

“As you can see from the pictures, the rapids in the river are not only plain rocks. They also have sand dunes and vegetation and this complex ecosystem is a habitat and breeding ground for fish and birds,” he explains.

A resident of Chiang Khong for more than 20 years, the 48-year-old doctor says he feels a strong bond with the river.

“I wasn’t born here and I didn’t grow up here. I came from Lamphun. When I first saw the river here two decades ago. I fell in love with the scenery and this town and decided to stay,” he explains. 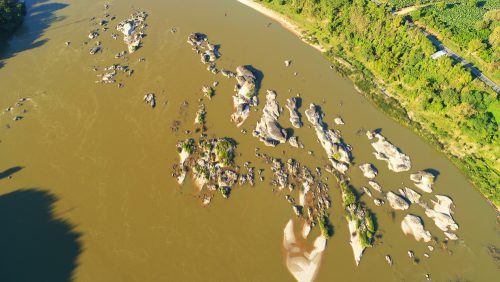 Sommai has always spent his time off capturing shots of his adopted town. Two years ago, when drone technology became cheaper and more readily available, he was quick to learn how to use one.

The technology, he says, has greatly improved his photographic skills and the resulting images can be used to campaign against the rapids blasting plan.

“I want the authorities to reconsider their decision to demolish the rapids, because once the rapids are gone, they can never be brought back. They will be gone forever together with the ecosystem and the way of life of the people who depend on them,” he says.

“This is only the first set of pictures of the Mekong River rapids. I am planning to use the drone to capture photos of all the rapids and features of the river in all three districts of Chiang Rai through which the Mekong flows. This month, I will send the drone up above the Kaeng Pha Dai rapids in Wiang Kaen District, which is also on the demolition list,” he says.

Sommai admits he is against the river navigation route improvement plan as a whole, pointing out that the profits earned from the project cannot compare to the losses that will be suffered by the local people and ecosystem of the Mekong River once the project is completed.

“Removing the rapids means the complex ecosystem and traditional livelihood of the local people will disappear too. This is the most prominent side effect of this controversial project,” he explains

“With the rapids gone, the river will lose its beauty forever. The river channel will also change and the boundary between Thailand and Laos will move. From the images the drone has taken, it’s obvious the border change will not be in our favour.

“Before making a decision to change the river forever, the governments of the countries through which the Mekong River flows should consider other options for transportation such as roads and railway.

“Of course river transportation is the cheapest option for Chinese merchants to transport their goods to the countries downstream but the damages from the project will be very expensive for the people who depend on this river too,” he warns.

Having seen these beautiful photographs, surely it would be a tragedy if the scheme went ahead. To destroy a thing of such natural beauty would be a huge loss for generations to come.