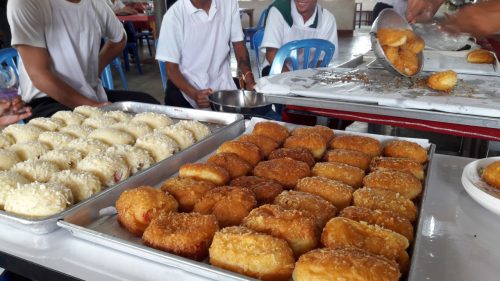 Catering, one of the vocations on offer in the rehabilitation scheme.

Drug users who have entered a new programme designed to get them off drugs and offer them the chance of a normal life, are making positive comments about the scheme.

A 42-year-old father of three, referred to by the alias “Nont”, said that he now thinks he can cook for a living as he practised making dumplings at the 310th Military Circle’s Wiwat Phonlamueang School in Tak province. Instead of going to jail, he was sent to the school to undergo drug rehabilitation, as the court decided to give opportunities to drug abusers who have not committed serious offences.

The rehabilitation programme takes four months and is designed to help addicts kick their habit. In order to help drug abusers find proper occupations, the programme includes one month of vocational training.

Nont is among those registered for a dumpling-making course.

Nont went on to say that dumplings are easy to make and only require a small investment fund and a few tools, so he thinks he can make a living out of it.

Pae, 22, (not his real name) is also very happy about the vocational training during his drug-rehabilitation programme. “While I am cooking, there’s nothing else in my head. I can only feel happiness,” he said.

He has been training at a big restaurant in Tak’s Muang district for three days to learn how to prepare and cook steaks from scratch.

Lamphun province native Joe, 23, (not his real name) said he loved working at a restaurant and cooking, so this would be his future job.

There are more than 100 trainees.

“We think these skills are necessary and useful for the expansion of the Tak special economic zone,” said university lecturers’ representative Supornrat Watcharanarumol. “We are happy to see the trainees focused and enjoying the training. I heard some also want to make a living at home using these skills, so we are overjoyed to help give them career options.”

The school’s director, Colonel Wachirawit Sarikanon, said the institute, established in 2006, had its own vocational training but welcomed the QLF scheme. “We allow the trainees to sell steaks and snacks during the visiting day and they made thousands of baht,” he added.

The deputy rector of Rajamangala University of Technology said that those serving in the military via the draft, accounted for 30 per cent of working-age men in the country, so if they had increased vocational options in line with the development of areas of the country, it could stimulate the economies of their hometowns.

The scheme has a follow-up programme to aid trainees, including helping them finding a career.