The Dutchman Who Brings Clean Water To Thai Schools (Part 2) 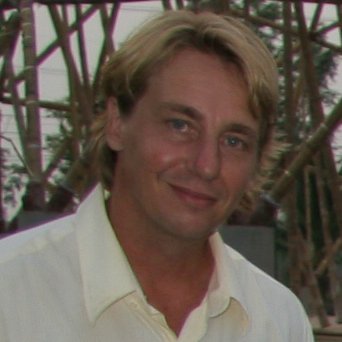 In a previous article we told you about Ruben van Beek’s idea to help poor Thai families with his incredible idea of allowing them to be pig-owners. Following the resounding success of the project, Ruben wanted to take things further and identified lack of clean drinking water in Isan as a major problem. So the HOAT Foundation decided to do something about it. There follows a detailed account of what they decided to do and how they did it.

The drinking water situation in the rural areas of North-Eastern Thailand which is called Isan and it is the poorest area of Thailand, is critical . Farmers make up the greatest proportion of the population, and the outstretched fields are used for growing rice, cassava, cane, Eucalyptus trees, etc.
The people living in this region and in other parts of Thailand have always been dependent on rainwater as their primary source of water.
Nearly every house has one or more so called “Thai jars”, into which rain is collected during the 6-month long rain season.

This water is primarily used as drinking water. The lack of enormous industrial sites in the rural areas makes rainwater the best source of drinking water.
Roofs and drainpipes lead the water to the receiving tanks. However, the water starts becoming contaminated from  materials such as birds, reptiles, also rat and cat feces. In order to have water during the 6 months in the year in which it doesn’t or rarely rains, water needs to be stored in the tanks for a long period of time.
Animals such as lizards and birds drown in the tanks frequently, and begin to decompose in the tanks with the help of bacteria. Furthermore, the tanks are a nesting pot for mosquitoes and other pests. 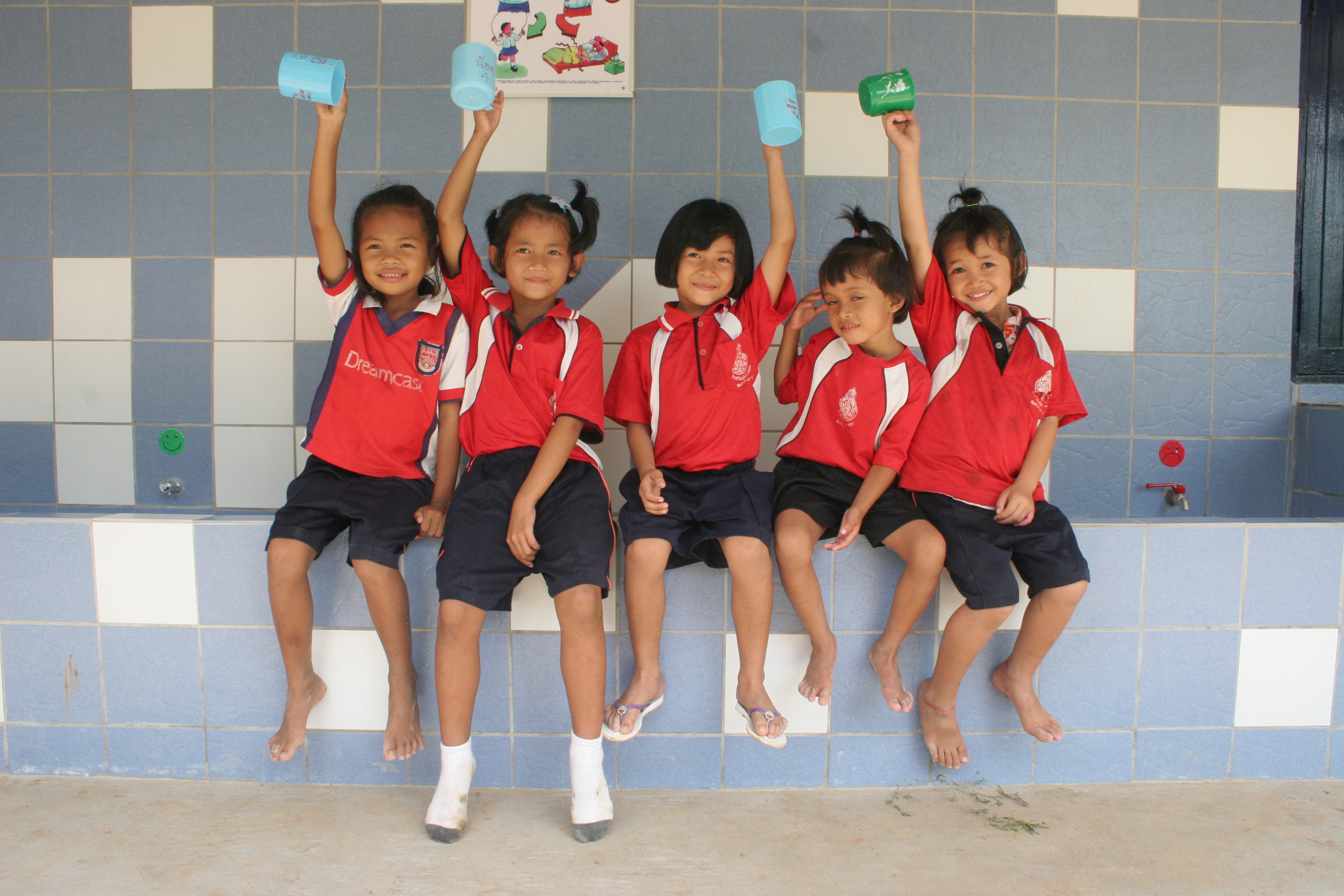 The situation in the schools is exactly the same, only with much larger receiving tanks. The quality of the water in the tanks worsens with time and the pathogenic bacteria keep reproducing. Treatment with special filters that prioritizes in killing pathogenic bacteria is an important necessity in order to turn this water into clean and safe drinking water. It can also be that a school asks us to install a water treatment plant, but that the school does not have enough storage capacity available to store the rainwater.

Up until now they use the unfiltered rainwater as drinking water in the dry season. After that, a big tanker truck pumps the tanks full with water from a pond in a rice field, or people start drinking tap water originating from a pond, or tap water that has been pumped from a shallow ground source. In both cases the water is not or barely purified and contains a lot of pathogenic bacteria and chemicals. Some villages add chlorine to the tap water, which is highly dangerous for people’s health. 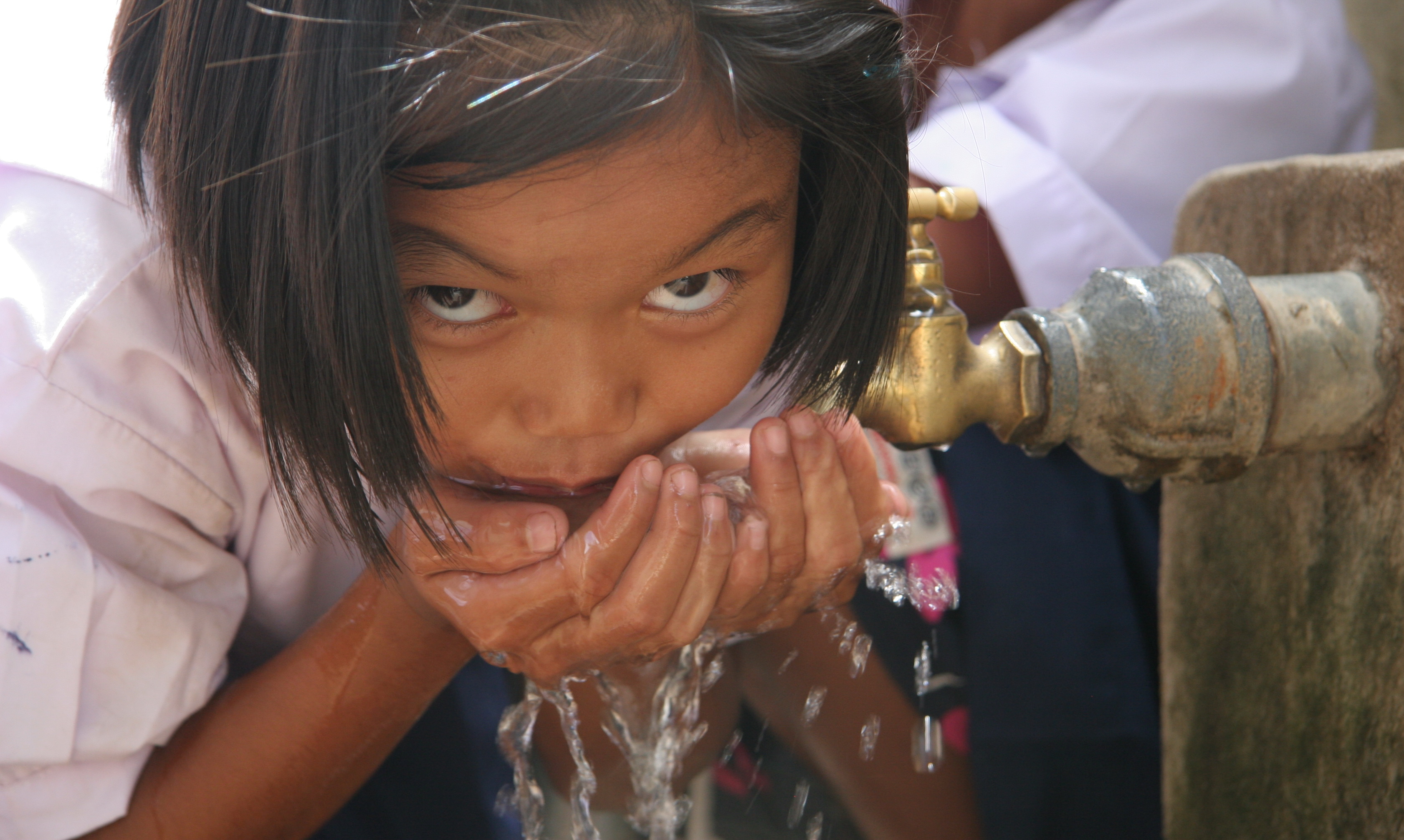 The large water tanks are often in a bad state and poorly maintained. Usually they aren’t shut completely or are missing a lid entirely, making it easier for filth to end up in the tanks. Dead lizards, mosquito larvae, frogs, rats, and other animals are often found, as well as other filth such as leaves off trees. Rats, cats, birds and other animals drop their faeces on the roofs. In the rain months, everything washes straight into the receiver tanks, in which everything brews during the hot months. On the bottom of receiver and storage tanks is a small tap from which the children directly drink the unfiltered water. Tests have shown that the water contains coliform bacteria such as E. Coli. The schools where HOAT has placed water filters report a much lower sickness absence than before.

The rainwater filter technique used by HOAT consists of a few steps.
First is the fact that the water that needs to be filtered is as clean as possible in the first stage, in order to get the best results. This sounds obvious, and it is. It is harder to change a mud pool into drinking water than it is to change recently fallen rainwater into safe drinking water. Furthermore, the filter cartridges have a much longer durability when they are not too heavily loaded. Because of this, we start filtering as soon as the water runs out of the gutter. However, first preparations must be made such as installing new gutters and cleaning and repairing existing and neglected water tanks.

LEAF AND GARBAGE FILTER
Second, the rain water passes a leaf filter that makes sure that leaves and other coarse material can’t disappear in the storage tanks. This filter also retains cockroaches, lizards, tree frogs and other animals. The leaf filter consists of a concrete round bin that’s installed above the tank and underneath the rain pipe. In the concrete bin are two baskets shoved into each other, fitting exactly into the bin. Between these baskets is filter material that only has to be replaced a few times a year.
New concrete lids are poured over the manholes that exactly follow the contours of the tank. This way, the lid fits on the manhole (the opening on top of the tank which provides entrance to the tank for inspection and cleaning of the tank) like a puzzle piece, and there are no seams or crevices through which small vermin can crawl into the tank. A painted arrow on the lid and tank marks the position of the lid on which it fits precisely on its place. The overflow pipes at the top of the tanks that are meant to let the excess rainwater out of the tank when it’s full but water still falls, feature a net. This way the water can get out of the tank, but the vermin can’t get into the tank.

By installing the leaf and garbage filter on top of the tank, we tackle an important problem that used to be common. The internationally used traditional way to prevent filth build up in the gutters during the dry season flowing into the tanks during the first big rainfall, consisted of a system that had to be manually controlled. A large valve that was connected to a rain pipe had to be open during the the first rainfall so the water coming down from the roofs and the gutters wouldn’t fall into the water tanks, but like with a regular rain pipe, fell on the ground. This way roofs and gutters were cleaned before the people could start collecting the rain water from the second big rainfall 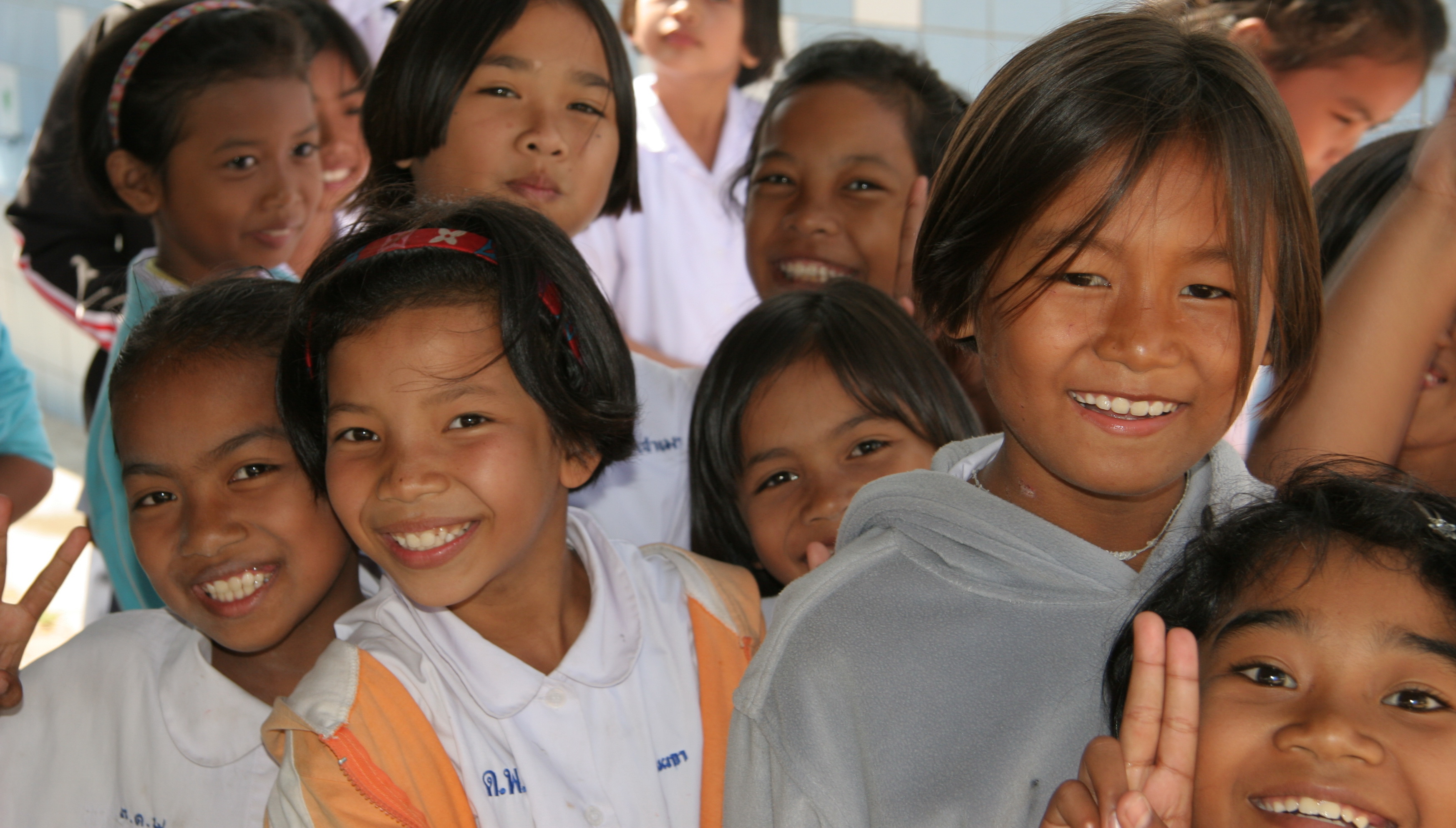 Opening the big valves generally didn’t cause any problems, but people usually forgot to turn them off after the first big rainfall and cleaning of the roofs and gutters. This way no water could be retained for months, which led to a shortage of water during the dry season because the water tanks were barely full or completely empty. Also, playful children would open the valves without the janitor knowing. Thanks to this renewed system with the baskets on top of the tanks, every drop of water that falls can be caught.
There is no operating mechanism so the people don’t have to remember something that is important to the functioning of the system.
Children can no longer play with this system because the system is situated on top of the tank.

The Rainwater Filter
The actual filtering of the water happens in a set of 3 filters that together shape the complete filter.
The first filter is a stainless steel 80 micron pre-filter which stops dirt 80 micron and larger. The second filter is a fiber pre-filter which stops dirt 10 micron and larger. The third filter kills the bacteria. This filter contains a balanced mix of high grade activated carbon, copper, and ceramic elements which give out colloidal silver in the shape of ions.
These silver-ions kill bacteria, viruses, algae and cysts, all the while getting help from the released copper-ions.
The copper-ions working together with the silver-ions increases the bacterium killing effect. The porosity of the ceramic elements creates a huge surface where the silver touches the water.

Recently, an independent laboratory working for the Thai Ministry of Public Health has confirmed that after a period of about one year the water at the schools that have a rainwater filter is 99,99% free of pathogenic bacteria, which means it is 100% safe to drink this water. 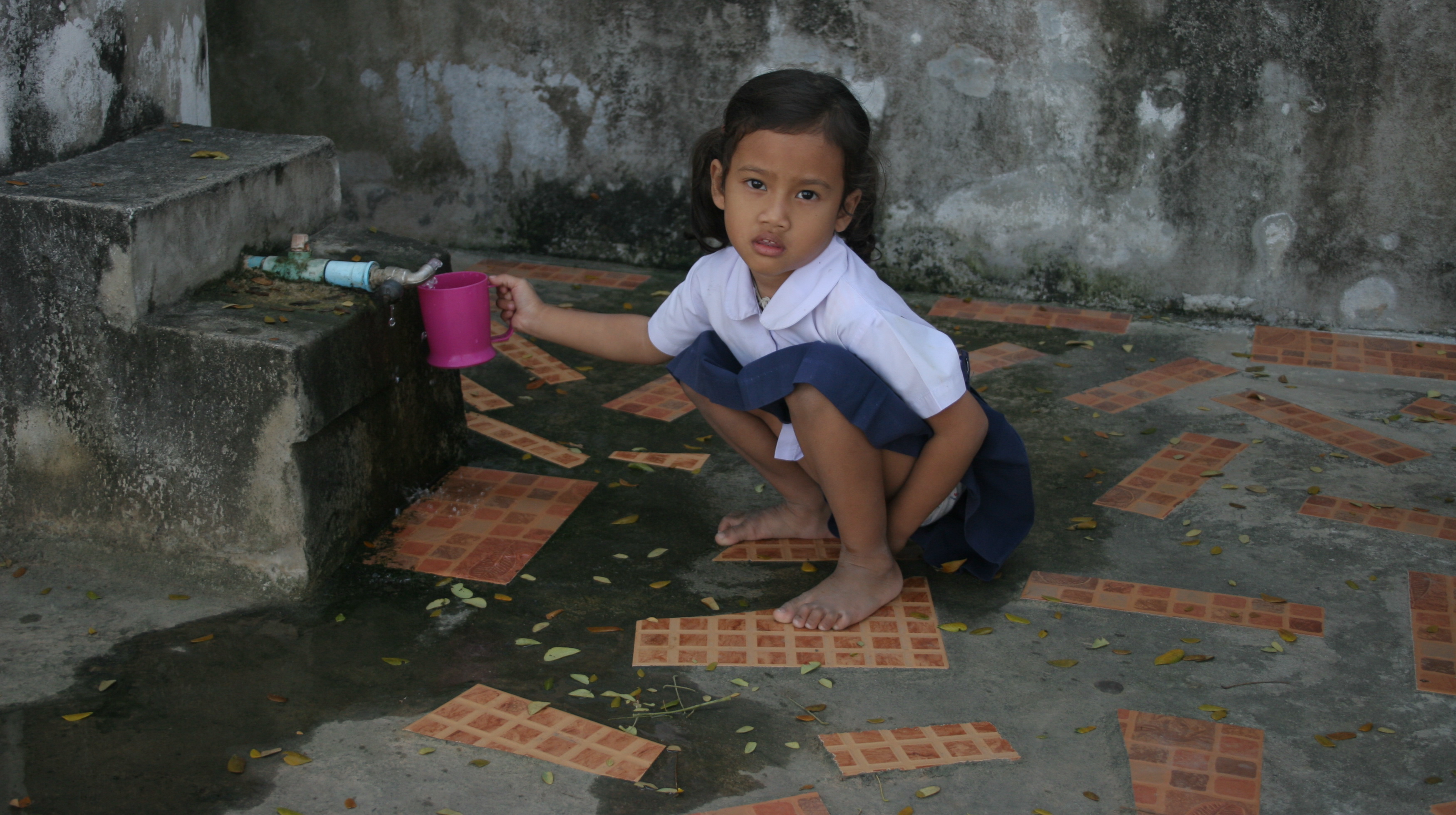 COLLOIDAL SILVER
What is colloidal silver and what does it do?
Colloidal silver is very finely divided silver that has been dissolved in (distilled/demineralized) water via electrolysis.

The size of the silver particles is between 0,015 and 0,005 micron. These particles make positively charged silver ions when put in water. The electric charge of these particles destroys the bacteria.

The colloidal silver technique is used  to sterilise water on board of space shuttles and airplanes. Nowadays colloidal silver is often used to prevent the growth of algae in tanks and to kill bacteria.

Now that the water has been filtered and the bacteria has been killed, the water is clean and safe for drinking. The water slowly fills a 100 litre tank on which a float is placed which also releases silver ions to the water. This float has been placed to prevent recontamination.

Eventually the drinking water is led to an appealing drinking place where the children can drink. This drinking place is always situated close to the area where children have their lunch. Taps with a green smiley sticker have clean and safe drinking water. We also place two taps with unfiltered water. Not rainwater, but sourcewater. This water is meant for washing dishes and hands. This way the rainwater is used exclusively used for drinking water.

Taps with a red sad face sticker have unfiltered water. We place the taps with unfiltered water to clarify that there is a difference between drinking water and unfiltered water. Thanks to these stickers even the littlest children know which taps they can drink from. There has been made a cut out in the concrete by the drinking tap, so people can fill bottles. The taps are self- closing so they can’t accidentally stay open and waste safe drinking water.

The Foundation installs and maintains the filtration systems in schools free of charge for two years. After that the headmaster and teachers of each school sign a document to say that they will then finance and maintain the system themselves. Should they fail to do so, the Foundation removes the systems. This may seem harsh but it is vital that the schools learn how to look after themselves.

Obviously, it’s all about funding and Ruben has now formed a company called H2O Water Systems and installs purification systems anywhere, businesses, homes etc. He intends to put a percentage of his profits back into the Foundation so this wonderful project can continue. We will bring you more details of his company in the final article.