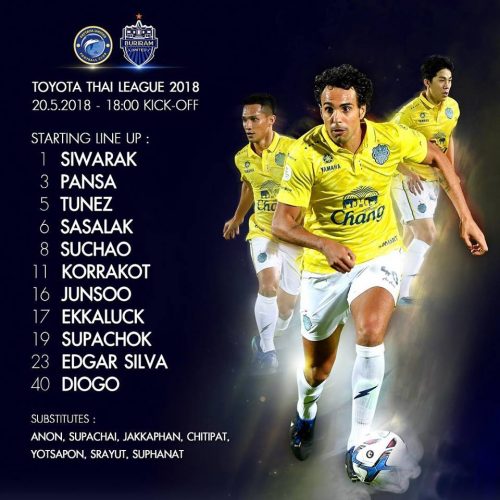 Buriram were looking to bounce back from their Champions League disappointment in Korea when they travelled to Pattaya. Both teams were desperate to win the game as the home side are being sucked into a relegation battle with five teams going down this season.

As usual, there was a large, vociferous Buriram following for this fixture with the home fans also helping to create a great atmosphere. From the start both teams looked to attack but it was Buriram who almost took the lead in the 4th minute when a left-wing cross found Edgar unmarked but he got slightly under the ball and his header crashed against the crossbar.

The deadlock was broken in the 17th minute when Supachok laid the ball back for Edgar to place his shot perfectly into the far corner of the net. The game continued to go from end to end but it was Buriram who were looking the more dangerous. They increased their lead three minutes before the interval when Korrakot curled an inviting free-kick in from the right for Edgar to rise and send a glancing header into the net.

So 2-0 at half-time and it became 3-0 in the 58th minute when Diogo played a one-two with Suchao before crossing from the left for Edgar to hit a low,first-time shot past a helpless keeper from eight yards. 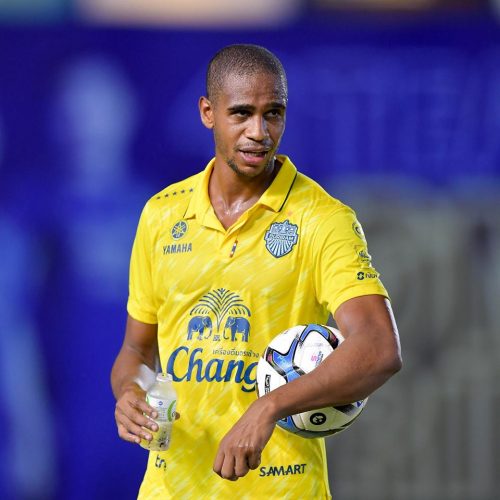 Edgar with the treasured match ball.

Pattaya responded well and reduced the deficit in the 63rd minute when Picha latched onto an excellent through ball before coolly beating Siwarak with a low shot. Pattaya had a couple of chances to put the pressure on Buriram but failed to take them and they were punished in the 79th minute when Supachok made a good run down the right before sending over a dangerous low cross. It was missed by a defender and the ever-alert Diogo slid in to turn the ball into the net.

It was all Buriram now as they looked for more goals. They brought on Suphanat late on and the fifteen year-old found Supachok with his first touch but the shot was deflected wide for a corner. The youngster then tried to audaciously curl a shot into the top corner but it was wide. Big things are predicted for this young man and we will watch his development with keen interest.

Deep into stoppage time Pattaya pulled a goal back when sloppy defending by Ekkaluck allowed the ball to be cut back for Jaroensak to slam into the net.

A disappointing end to a thoroughly entertaining game which Buriram certainly deserved to win. Edgar took his goals well and looks a different player from the one of a few weeks ago.

Next game sees Air Force visit the Chang Arena for the final game of the firsthalf of the season. Kick-off is 6pm.