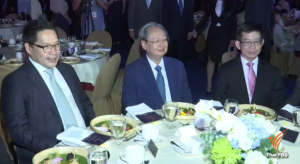 Political parties can hold fund-raising events until the Royal Decree on the election of members of the parliament comes into effect after which such activities are banned, but political donations can be received all the time, according to Election Commission’s deputy secretary-general Sawaeng Boonmee.

He was responding to questions related to a fund-raising banquet organized by Palang Pracharat party’s fund-raising event on Wednesday during a meeting Friday between election officials and representatives of 13 newly-established political parties.

Critics and rival politicians have contended that the Palang Pracharat’s fundraising might go against the election-related laws, citing that some of the donors which bought dinner tables priced at three million baht were governmental agencies.