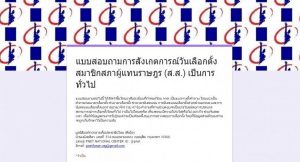 According to a key election monitor, Sunday’s election was not free or fair.

In a statement released yesterday, the People Network for Elections in Thailand (P-Net) said vote-buying was prevalent in many areas of the country, especially the North, Northeast and Central regions. This apparently happened a few nights before the ballot.

P-Net blamed the problem on the Election Commission (EC), saying the agency had taken no measures to prevent or suppress election fraud. The EC also failed to take decisive and prompt action to discourage such violations of the electoral law, P-Net said in a statement.

Certain parties and their candidates openly relied on state officials and government authority to take advantage over their competitors, the watchdog added.

“P-Net believes this election was not sufficiently free or fair. A free and fair election is necessary to reform and change Thailand,” the statement said.

However, it admitted that Sunday’s election did show some improvements in terms of political parties compared to previous polls, with contesting parties presenting constructive policy platforms.

As for the EC, the watchdog said that judging from the agency’s performance in the seven months ahead of the national vote, commissioners clearly lacked experience and ability to organise a general election efficiently.

‘EC did not use its authority’

“Despite the authority given to them by law, the EC failed to fully make use of this power. Also, they were not able to spend the increased budget carefully,” P-Net said.

It also slammed the EC for not being prepared enough to properly organise advance voting for Thais living overseas. It pointed to the fact that many ballots cast overseas were not delivered on time for vote counting, which caused them to be considered invalid.

Moreover, P-Net said, election officials dispatched at polling stations were “less precise and strict” in complying with relevant rules and regulations, compared to election officials in previous polls. The group blamed this on the lack of preparation and training.

P-Net also noted that unlike in previous polls, Sunday’s election had no volunteer observers at polling stations, which it said made it easy for possible fraud. “In many cases, it was found that state authorities were trying to influence voters,” it said.

The monitor also said the voter turnout was a lot lower than expected, which it blamed on insufficient public relations on the EC’s part.