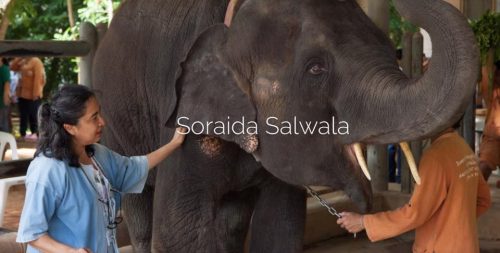 The founder of Friends of the Asian Elephant Foundation has stepped down as its secretary- general.

Soraida Salwala, 60, announced her resignation on Facebook yesterday, explaining that the move was intended to pave the way for the selection of a qualified person as her successor.

She ended her message with “I would like to extend to all of you my heartfelt thanks.”

It remains unclear whether she had decided to quit because of any particular issue. Dozens of people have expressed encouragement and support for her on her Facebook page.

“My moral support goes to you. I don’t think anyone can be more qualified than you as the secretary-general of this foundation,” one \netizen said.

Soraida is well-known for her interest in wildlife conservation, particularly her care for elephants.

She once revealed that during her childhood she noticed a crying man sitting next to an injured elephant during a provincial trip.

After her car moved past, she heard a gunshot. She would figure out when she grew older that the man might have committed the mercy killing of the elephant that day because no hospital existed for the animals at the time.

The encounter inspired Soraida to set up a medical facility especially for elephants.

When she launched the Asian Elephant Foundation 25 years ago, it opened the world’s first elephant hospital.

Earlier this year, Soraida turned to Facebook to announce plans to close down the hospital, citing health problems and inadequate funding. Within days, more than Bt40 million was donated to the foundation’s account.

Soraida subsequently changed her mind and decided to keep the hospital in service.