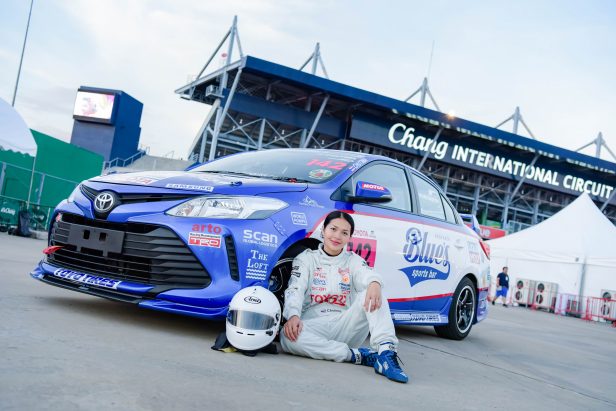 One of the biggest events to be held at the Chang International Circuit in Buriram last month, with several former formula 1 drivers taking part was the Super GT Series from Japan, which is a massively supported series in Japan and across the world.  As with all motor racing events the main attraction is always supported with more minor categories of races and racers.  Among those taking part was 29 year old Chutima also known as “Elle” from Khon Kaen. Elle in only her 2nd race in her motor racing career and the first race at this circuit.  From the age of around 15 years old Elle began to notice the excitement of motor racing from watching movies and formula 1 on TV. 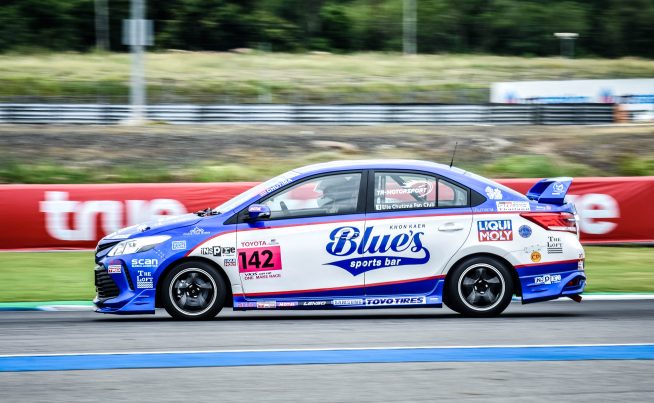 Early on she decided that she wanted to be a racing driver but also realizing it may not happen because motor sport is an expensive activity. Never having seen any live racing Elle headed to Buriram last October with a friend to get closer to the sport that she wanted to be part of.  Her friend was also a good friend of   Thomas Raldorf, a seasoned racer, having raced all over Thailand since 1994 and racing that weekend in his Porsche 997 GT3.  Elle was lucky to visit his pit garage and they briefly spoke about all things motor racing.  Several weeks later contact between the two was made again and not only did Elle’s motor racing career start but so did her relationship with Thomas.  This season Thomas is taking a rest from racing and is now coaching Elle driving a Toyota Vios, a car fitted out by Toyota for racing and supplied to the customers in the Toyota Vios Lady Cup which is a one make series.  The cars are the same standard as the road cars with only a few items that can be tinkered with before a race, even the ECU is removed prior to a race and each teams draws a new one from a hat, thus preventing any remapping of the ECU. 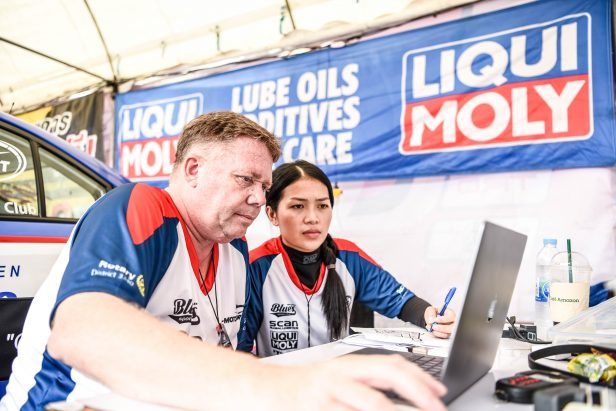 Having never raced at this circuit Elle had a very steep learning curve, but her coach Thomas has been racing here since the track opened and gave her good advice.  Eight laps are allowed for practice in which she got to know the track layout. During the next 8 laps for qualifying she improved her lap times by 5 seconds which got her to 11th place starting grid position.  The race was uneventful for her, challenging for a place on a couple of occasions but  driving with some technical issues causing the traction control and anti-slip unit to be active she was unable to make serious gains and finished 10th but her lap times still came down by another 4 seconds, a great achievement.  The traction control and anti-slip unit is a standard setting on the road cars which can be forcibly disabled with a combination of foot and handbrake movements, however on this occasion it would not disable, if it had she would probably have moved up to a higher finishing position. Unfortunately though, the stewards applied a 20 second penalty due to her exceeding the track limits, this dropped her finish position down to 13th position.  Elle was feeling a little dejected after the race but was happy with her pace improving with every lap.  If this continues Elle will be become a serious contender not only in lady races but also up against all the male racers.  She also has her sights set on open wheel racing in the future.  You can follow Elle more by taking a look at her fan page on Facebook (Elle Chutima Fan Club).  Here at Times Group we wish her great success in her motor racing career. 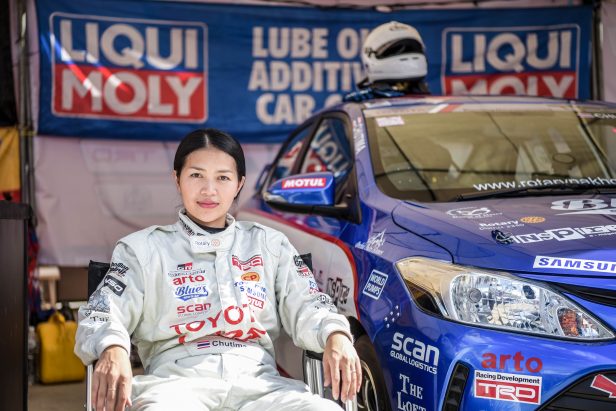 When not racing, Elle can be found at the Blues Sport Bar which she runs together with Thomas. The sports bar is very popular with the expat community and is well known for having arguably the best English breakfast in Khon Kaen.  The bar is fully air conditioned and serves both Western and Thai food, and many people travel long distances (up to 60 km’s) just to have the “big breakfast” which by the way is available all day from 06.30 am to Midnight. Blues sports bar also has its own Facebook page (Blues Bar Khon Kaen).