As the leaders were making their way around from the start the red flags came out.  Behind them a startline incident involving 3 riders brought the proceedings to a halt. The restarted race was reduced from 8 to 6 laps which meant the race would be all out from most of the riders.  Malaysian rider Ahmad Fazli Sham took the lead on the first lap on his Yamaha and took the win for ONEXOX TKKR SAG Racing Team ahead of a quad of Indonesian riders with Wasman Wello in second and Wahyu Nugroho in third.

Second weekend win not to be

After dominating the proceedings in the AP 250cc class on Saturday Muklada Sarapuech did not have the Sunday that she would have wished for.  Starting the day in a good position from the previous day she uncharacteristically had a spill during the warm up.  What she did know though is that she would start with 500rpm less for the race due to the new equaliser rule.  Starting from pole her race ended on early with a puncture and she pitted on lap3. Team mate and class rookie Tatchakorn Buasri stepped up to the mark and with mounting pressure from his rivals held on to take the  second win of the weekend for the AP Honda Racing Thailand.  So far three riders have now been given their first equaliser rpm reduction but it is the same three that head the championship this far, Andi Muhammad Fadly in first place, Muklada Sarapuech in second and Aiki Iyoshi in third.

Can anyone beat Peerapong Boonlert in the Super Sports 600cc class?  After another superior ride in race 2 it seems not!  Peerapong had a slow start from pole position but as they came back into view at the last corner he was in front again, a position he did not give up all the way to the flag.  Adam Norrodin came in second for his second podium of the weekend with Kasma Daniel standing on the podium for the first time this weekend.  Peerapong has taken maximum points in this class and is now 79 points in front in this class which is more points than the second in the class, Andi Fariq Izdihar has accumulated.

After his win on Saturday Malaysian rider Azlan Shah Kamaruzaman started race 2 from pole from where he started strongly.  By lap 2 though he had lost the lead to Australian rider and rival Broc Partkes and then down to third when Apiwat Wongthananon moved up.  The BMW rider stayed close to these two riders for the duration of the race, taking 2nd place from Apiwat on the last lap.  It looked like Azlan may have to settle for second place but a daring move on the last corner, seemingly outbreaking Broc for the lead.  Down in the pits his team went crazy as he passed the line to take the second ABS1000cc win of the weekend.  Broc Parkes continues to lead the new class in ARRC with Azlan following in 2nd only 8 points behind.  With 3 wins from 6 races, more than any other rider, Azlan and the ONEXOX TKKR SAG Team is starting to show its potential in the ABS1000cc class.

Round 4 takes the Asian Road Racing Championship to Japan and the Suzuka circuit.  To follow more of this exciting racing check out the ARRC website for all of the news and results. 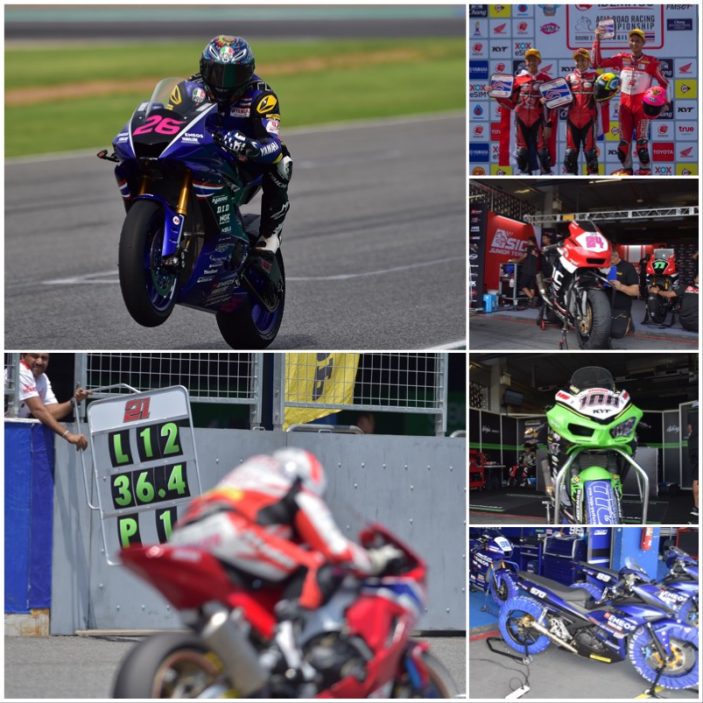