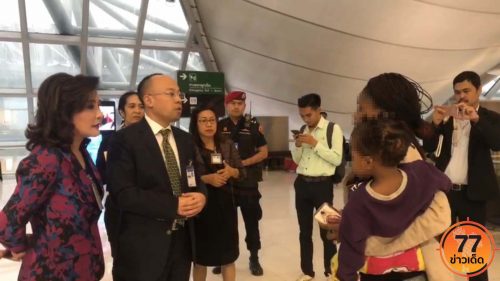 A family of eight from Zimbabwe has been living in Bangkok’s Suvarnabhumi International Airport for the past three months having been denied boarding when attempting to fly to Spain As they had all overstayed their 30 day tourist visas.

Because they had overstayed their visas they were then denied entry back into the kingdom and have refused the Thai government’s attempts to send them back to Zimbabwe saying they fear for their lives going back.

Officers from the Immigration Police spoke to the media this this week confirming that the family which includes four children between the ages of 2 and 11 have yet to be moved to a detention centre and are currently seeking help from the United Nations High Commission for Refugees (UNHCR.)

The family hope that their request to be granted asylum will be accepted and that they will be moved to another country, Thailand currently does not recognize refugees.

In the past the family had again attempted to make it to Spain from the Ukraine but were denied entry as they were not in possession of Spanish visas.

Immigration officers confirmed that the family entered Thailand on a 30 day visa back in May and were detained at the airport when they attempted to leave on October 23.

The family’s plight of living in the airport first caught media attention when an employee at the airport was pictured last month giving one of the children a gift for Christmas.