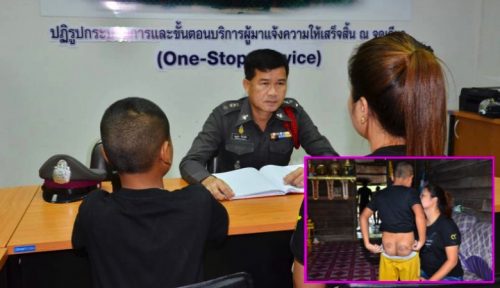 A well known mother who is a Likay performer took her ten year old son to the police yesterday after she said he was hit by an English teacher at school.

Matsaya Ratanakun, 31, who tours all over Thailand with the Thiwaporn Ngamwilai troupe of performers, said that her son First was usually left in the care of her parents.

She came back on Friday and her son said he had been hit on the buttocks by a teacher called Charnchai because he had not handed in his homework.

Next day when the bruises showed she decided to post the pictures of her son’s behind on Facebook.

A Thai language teacher messaged her to ask her to take the pictures down as the teacher concerned was denying he did it.

This enraged the mother further so she decided to go to police.

Police took their own pictures of the boy’s rear before sending him to hospital for a check.

They have contacted the director of the school in Pho Phraya sub-district of Suphanburi and will be interviewing the teacher involved to get to the bottom of the matter.

The Buriram Times can take no credit whatsoever for the closing comment and would like to congratulate Daily News on their perceptive use of the English language.

However, on a serious note this is another example of physical abuse by a teacher. There is no place for, or indeed any need for, this kind of punishment. It is assault, plain and simple which needs to be eradicated from Thai classrooms.