Farang On A Bike Steals Money From Temple 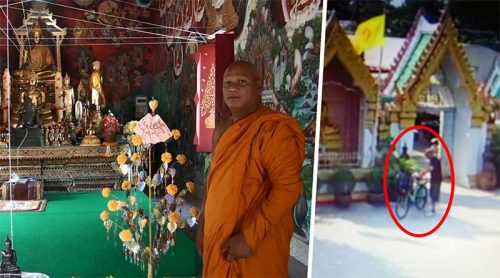 Farang parks his bike before stealing from temple. (photo:-Thai Rath)

CCTV footage at a temple in Ayuthaya showed a Caucasian man aged about 40-45 arrive on a bike and stop outside.

After puffing coolly on a cigarette he goes inside where another camera catches him casing the joint before he checks no one is watching and steals 1,000 baht from a donation tree in the chapel.

Reporters went to the temple of Wat Panomyong where monk Phra Natthapong, 52, told them that the incident happened on Sunday afternoon about 2pm.

Some people had donated money and Phra Natthapong had left the chapel for a while. When he came back he thought money was missing so he checked the two cameras the temple had installed.

He said he had not reported the matter to police – he just wanted to warn other temples and people in the area to watch out for this foreigner on a bicycle.

Once again we have to be grateful to one of our western brethren for bringing more disgrace on foreigners. Let’s hope Buddha has something special in store for him in the way of karma !