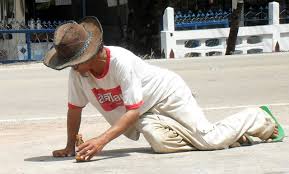 Often the result of cheap liquor.

The Thai Health Promotion Foundation expressed concern yesterday that the new alcohol excise-tax structure would drive drinkers to consume more cheap white liquor at the expense of their health.

Foundation manager Supreeda Adulyanon said the number of estimated drinkers in the country has remained constant recently. Many people have turned to drinking beer instead of liquor, he said, but the new excise tax structure would cause beer to become more expensive in terms of its level of alcohol in comparison to that of white liquor.

Supreeda worries that drinkers may turn to white liquor, with a resulting increase in health problems.

The Finance Ministry is scheduled to enact a directive enforcing the new tax structure as of September 16. The new tax would be calculated based on retail prices rather than on producer prices as is now done. The new tax would create a level playing field for producers. Some critics have claimed that the current approach works to the benefit of some producers over others.

Those in favour of the new approach argue that market forces should decide retail prices and tax authorities should enforce the law accordingly.

There is little doubt that any significant increases in alcohol prices will see many Thais turning to the traditional home brews which are indisputably more harmful . There is no regulation of alcohol content and the effects are more immediate, leaving people unable to control themselves in a reasonable manner.

There is a large anti-alcohol body in Thailand, yet once again new laws have been introduced which will likely see a rise in alcohol consumption. There is still no clear information what the actual increase in cost will be, despite the fact that the rise is due in under two weeks.

This is par for the course here which leaves consumers frustrated as they are left in the dark until the last possible moment.