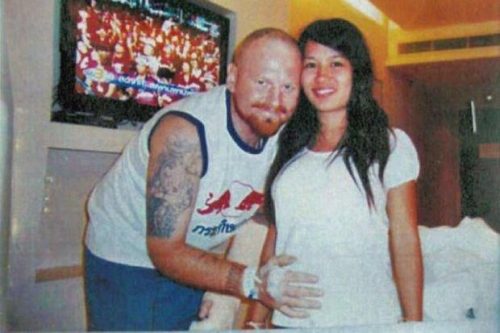 The third suspect wanted in connection with the death of Australian Denis Oake was arrested last month. He is in custody awaiting confirmation that he will be charged along with two friends with murder.

Mr Oake was riding home with his pregnant wife Nareerat on a motorcycle when they were attacked with a machete by three teenagers . The attack took place near Nakhon Ratchasima in March 2010.

It is believed that the three youths were angry that Mr Oake had cut them up on the road and they allegedly assaulted the couple shortly after. In a brave attempt to protect his wife, Mr Oake sustained severe head injuries, resulting in brain damage from which he later died.

One of the alleged attackers from Buriram and another from Khon Kaen surrendered to police following pressure from their families. However, a third, also from Khon Kaen, ran off and has since been in hiding in various parts of Thailand.

He was located on a construction site in Nakhon Sawan in October and immediately arrested. Rory Oake, the victim’s father, has praised the police saying that he couldn’t have been happier with their efforts to bring his son’s alleged killers to justice.

The police in turn stated that Mr Oake snr had been a driving force in the long search for the third suspect. Thai authorities were very keen to clear the case up as they were aware that the murder of a foreigner does not reflect well on the country.