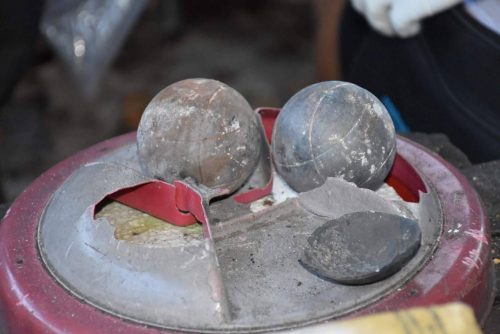 A firefighter was killed when one of three hollow steel balls he was heating in a burner exploded late afternoon on Saturday in Uttaradit’s Muang district.

Police responding to the fatal explosion report found firefighter Decho Phetchnin, 51, dead with a serious head wound. Two still-hot Petanque balls were nearby along with a shattered “Ang Lo” burner, whose parts were scattered in a 10-metre radius.

Muang Uttaradit superintendant Pol Colonel Disayadech Patcharapuwadol learned that Decho liked to heat his water-soaked Petanque balls in a burner for two hours before joining other firefighters for an after-work game.

Some players believe that heating Petanque balls increases the player’s control over the direction they move.

But on this occasion, one of the balls suddenly exploded while Decho was bending over the burner stirring them. A metal fragment from the exploded ball pierced his forehead and skull, resulting in instant death.

His family didn’t question the cause of death and have already collected the body for a funeral.