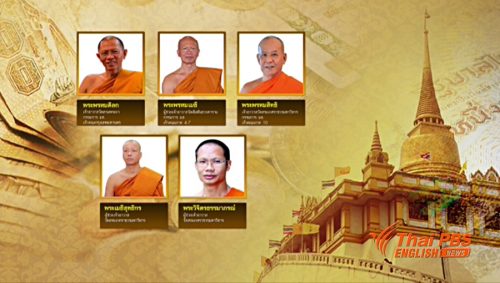 Three members of the Sangha Council and two other senior monks have been implicated in alleged involvement in temple fund embezzlement by the National Office of Buddhism.

NOB director Pol Lt-Col Pongporn Pramsaneh has already lodged a complaint to the Counter Corruption Police Division (CCPD) against the five senior monks for alleged embezzlement of fund for renovation of religious schools at three temples in Bangkok.

Pol Maj-Gen Kamon Rienracha, commander of the CCPD, said on April 16 that the case against the five senior monks had been forwarded to the National Anti-Corruption Commission and he himself had asked the NOB chief for a meeting on Thursday (April 19) to provide him with additional information about the case.

A social media team went to Wat Saket on Tuesday, but failed to meet the abbot and his two assistants. The living quarters of the three monks were closed and a car of the abbot was parked in the garage.

A religious school on the temple’s ground is under repairs as the school building is more than 60 years old.

NACC secretary-general Worawit Sukboon said he asked a legal panel to find out whether the NACC has the authority to investigate monks or not, pointing out that monks are not regarded as state officials.

Times comment:- As a foreigner, it never ceases to amaze me to see the depth of reverence that monks are held in by nearly the whole Thai population. Even the poorest would give their last baht if asked to. And be grateful for the opportunity to do so.

That’s why when cases like this come to light they upset me. It’s simply a massive slap in the face for the ordinary people who hold monks in such high esteem. They should be investigated and if found guilty should be punished like any other common criminal.