FMSCT All Thailand At Buriram This Weekend 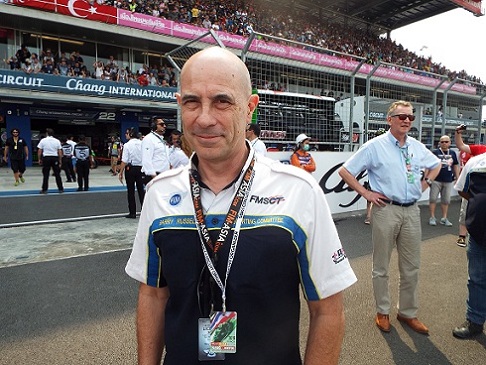 After a month of mourning the passing of the great King Bhumibol Adulyadej, the FMSCT All Thailand Superbike (TSB) Championship returns to Chang International Circuit in Buriram this weekend for Round 9.

The cancellation of three events makes this the penultimate round for the 2016 season and is likely to see all three elite categories clinched by Yamaha Thailand’s Rider’s Club Racing Team.

The Superbike SB-1 title is just two points beyond the grasp of Apiwat Wongthananon, who has been the sensation of season, with a perfect eight wins from eight starts.

His statistical superiority conceals the fact that every win has involved nail biting battles with his leading rivals, Powerspeed BigWing Honda’s Suhathai Chaemsap and teammate Anucha Nakcharoensri, the 2015 Superbike Champion.

Winning every round in the face of such relentless competition says much about the psychological step up that Apiwat has taken since joining Yamaha this season. He was always blisteringly fast, but sometimes snapped under pressure with a reckless lunge in the heat of battle to beat himself, effectively.

The passion remains, but has been shored up by improved mental and physical conditioning. The evident mindset transformation has been from “I have to win, whatever it takes,” to “I know I can win.”

It is also worth mentioning again that he clinched the ferociously competitive Asia Road Racing AP 250 Championship with two races in hand at India’s Buddh  Circuit, at the beginning of October.

With 20 points for a win and two rounds remaining, closest contender, Suhathai, would need to win both rounds with Apiwat not finishing to overturn the 38 point advantage the Yamaha rider currently holds.

The championship runner up position is up for grabs, however, with Suhathai leading Anucha by 11 points. Behind them there is pride to be fought for between the Kawasakis of SPW’s Chaiwichit Nasigul and Aekkachai Chiengwong. Suhathai’s teammate, Chanon, has also begun to show strongly in the last few races.

Superstock 1000 ST-1 has a similar look similar at the top of the table, with  Yamaha Thailand’s Anuparb Sarmoon having taken seven wins and one second place from eight starts. He has also been chased hard by teammate Anon Sangval, who took the only race win that did not go to Anuparb.

The two stand 35 points apart and Anon will go to Buriram determined to win. He was first past the chequered flag last time out at the Isaan track, but was penalised one place for overtaking under a yellow flag.

After dominating last year’s Superstock series, Anon’s determination and unwavering self- belief has been remarkable and the clean, hard racing between him and Anuparb has kept everyone, from spectators to Race Control, on the edge of their seats.

Behind the Yamahas, there are four Kawasakis capable of making the podium. Singha PTT Srisakon Motorsport’s Apidech Boonsri and Whiz Racing Project’s Bodeepak Watcharakajonwong are both on 99 points and behind them, Kawasaki Thailand’s Benjamin Fortt, who missed two rounds through injury and Zumo Racing’s Sahachai, who crashed heavily at Turn 12 last time in his last outing at Buriram, when his front brake lever parted company with the ZX-10R’s handlebar.

The Supersport SS-1 title is already with Yamaha Thailand, with Prawat Yanwut having put himself 43 points out of reach of Chusak, whose team have not entered the rounds at Bira this year.

Other established professionals have not consistently joined the grid this year, though Tingnote Thitiphong and Aey Vorapong have been able to get in front of the Yamaha when they have entered.

Newcomer to the professional level, Ratchada Nakcharoensri, has raced in just four rounds, but is fourth in the table, just three points behind Pradit. She has established herself as a regular podium contender and could well take third place in the championship.

For the rest of the programme, the rookie classes for the 1000 cc and 600 cc categories will start from the same grid as the professionals, as usual, while the novice Superbike SB-3 class will have its own race. The biggest grid of the day is sure to be the hard fought Open 300cc and 400 cc Division 1 and Division 2 race.

Declaration of Interest: Barry Russell is Jury President for the FMSCT All Thailand Superbike Championship