Foreign Divers Rescued After Pickup Was Swept Into Canal 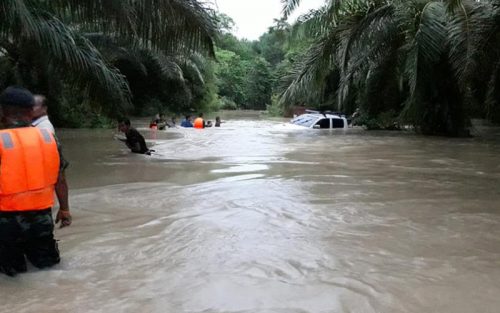 Two foreign divers took an unplanned plunge when a flash flood swept their vehicle off a road and into a canal in Thung Yai district.

Both men are diving instructors. They were trapped in their vehicle when fast-flowing forest runoff washed it off the road and into Sinpun canal near Nong Wa village in Kulae subdistrict. They scrambled out of the cab and onto the tray as the water rose up level with the windows.

It was some hours before their plight was noticed and police alerted. About 100 rescue workers, military officers and local residents rushed to help and worked for about two hours to pull them and their vehicle, a 4-door pickup truck with Bangkok license plates, from the canal.

They were named in media reports as Seetoh Yiyu, a Singaporean national, 37, and a Danish national identified as Claus, 45. Diving gear was found in their vehicle.

Police said the two men were returning from instructing at a cave diving course in Krungyan subdistrict of Thung Yai district and were on their way to Phuket. They were using a GPS to guide them. It directed them to a secondary road, by-passing another flooded road, when they were hit by forest runoff.

The two men thanked everyone for helping them, explaining they did not know the way to Phuket and had to rely on the vehicle’s GPS. They were not aware there was also forest runoff flooding that road.

Their vehicle was washed into the canal near an oil palm plantation. They managed to get out of the cab and stood on the back with their gear, barely above the floodwater, for several hours before local residents saw them and called police for help.