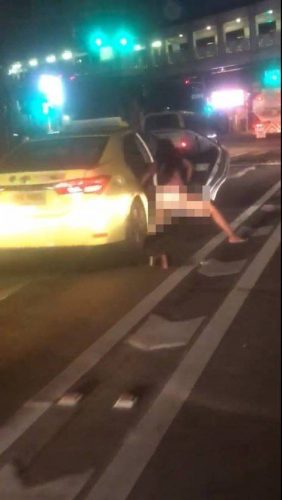 The woman caught on camera peeing in the street in Bangkok from a yellow cab has been found and fined.

Police found her and took a further sample for drug testing.

Thong Lor police swung into action when they realized the misdemeanor was committed near the Asoke intersection heading to Klong Toei that is in their jurisdiction.

The footage, taken from the back of a tuk-tuk early Thursday morning, was viewed by millions online.

Taxi Report TH reported on Facebook that the Thong Lor constabulary traced the woman who had been travelling with three companions from Asoke to Ban Kluay Nam Tai off Rama IV road.

She was described as a foreigner though her nationality was not mentioned and neither was her name.

She was fined 2,000 baht for breaking a 1992 regulation about urinating in a public place or in a public area not designated for urination by the authorities.

Further urine was taken at the station for drug testing but that proved negative.

The foreigner paid the fine and went on her way.