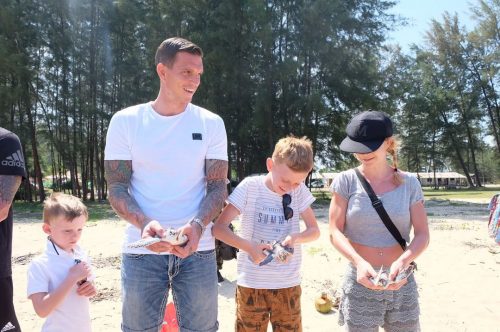 Daniel Agger is having the time of his life in Thailand and telling his vast social media following all about it.

Still only 33 years old, the 75-cap ex-Denmark skipper and Liverpool defender has been in the kingdom since February 24 with his wife, Sofie Nielsen, and their children.

During his time on the southern island, he has engaged in several activities such as meeting with fans, cooking Thai cuisine and taking Muay Thai boxing lessons.

The Swissotel Resort Phuket in Patong on Friday posted pictures on its Facebook page of Agger and his children liberating sea turtles on Patong Beach.

He says coming to Thailand is “a dream come true” and after touching down in the capital posted to his Instagram page that “Bangkok is great”.
Agger, who quit football aged just 31 in 2016, has had a varied and high-profile life ever since.

He has become a qualified tattoo artist with a unique business called “Tattoodo” (www.tattoodo.com), which has branches in Copenhagen, New York and Rio de Janeiro.

Apart from being a golf nut, he is a regular charity fundraiser and counts among his acquaintances the former Danish PM and now CEO of Save the Children, Helle Thorning-Schmidt.