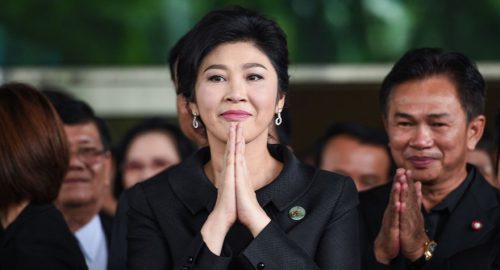 Former prime minister Yingluck Shinawatra has left Thailand and is unlikely to be in any of the neighbouring countries, Deputy Premier and Defence Minister Prawit Wongsuwan confirmed hours after the Supreme Court issued a warrant for her arrest on Friday. He said authorities of Singapore, where she was rumoured to have flown to, had told their Thai counterparts that she had not entered that

“We don’t know exactly in which country Yingluck is now,” General Prawit said.

Prawit, who is in charge of the police force, said he would not dismiss a high-ranking police officer rumoured to have helped Yingluck flee the country.

There was speculation that the former prime minister could have fled to Cambodia, Singapore, Hong Kong or Dubai.

A security source said Yingluck went to Koh Chang in the eastern seaboard province of Trat and flew in a helicopter to Phnom Penh, from where she reportedly took a chartered plane to Singapore. She was accompanied by a senior state official who helped facilitate her departure without having to pass proper immigration process, according to the source.

The Supreme Court’s Criminal Division for Holders of Political Positions on Friday issued an arrest warrant for Yingluck after she failed to turn up for the verdict reading in the negligence case against her over her government’s rice-pledging scheme. The court postponed the verdict reading to September 27 and ordered the seizure of Yingluck’s Bt30-million bail.