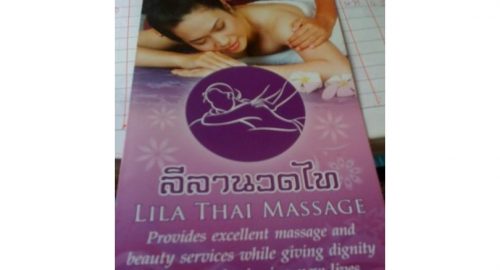 Leaflet from the massage parlour that employs former prisoners.

For many people who have served prison sentences it is often nigh-on impossible to find work.

Speaking on condition of anonymity, an elderly man lamented how his son was rejected at the last stage of recruitment after a government agency found out that he was once jailed over a brawling offence.

“Didn’t they say former inmates would be allowed to work?” the father said.

He was not the only one to complain about how difficult it is for an ex-convict to find a proper job.

“What could a former inmate do if he didn’t have capital to start a small stall? What if he just had a bachelor’s degree? Does he really need to lose all his future because of a minor offence he once committed and for which he had already been punished?” said a post on the Internet.

Naowarat Thanasrisudarat, a former director of the Chiang Mai Women’s Correctional Institution, said she had seen too often how former inmates were subject to workplace discrimination.

“Even if they have already started working, they will be pressured or laid off as soon as employers know they had been in jail before,” she said.

Aware of the difficulties former inmates often face, Naowarat decided to help. After retiring from the government service, she opened a massage parlour and recruited former inmates.

She stated that they had received traditional Thai massage training during their jail term.

“Foreign media have run reports on my massage parlour. It has its selling point,” Naowarat said.

Although “Lila Thai Massage” has managed to win support, it is now barred from hiring recently released inmates.

According to the newly introduced Healthcare Business Place Act, a person must have completed his or her jail term for at least one year before taking a position as a masseur or masseuse.

“Police have pushed for this law, saying that such a stipulation is necessary so as to prevent the risk of service users being assaulted or losing their property while receiving the service,” Naowarat said.

She said she had tried to block the legislation of this law.

Naowarat said the legal stipulation made no sense because it would only increase the risk of former inmates going back to their previous way of life.

“When they don’t have a means of a livelihood, they may just go back to selling drugs. One year is a long time. How can they feed themselves and their family during the period?” she said.

Apparently, “Lila Thai Massage” had been in operation for nearly a decade and there had never been a single incident of theft.

It is standard practice for all staff to turn over the stuff customers left behind to the reception counter so that customers can conveniently retrieve them.

It makes sense that society should give former inmates an opportunity to work to prevent them from becoming repeat offenders.

Research by Kulapa Vajanasara of Mahidol University’s Institute of Population and Social Research said many existing laws apparently discriminated against former inmates. Ex-convicts are legally barred from serving in the police force and government services. Lawyers and doctors must have clean records too, as any criminal conviction will immediately bar them from the professions.

Persons who have just been released from jail are even barred from serving as public-transport drivers. To get a job, they must have completed their jail term for at least three years.

All such laws hinder the hopes of not just ex-inmates but also the Corrections Department, which organises several courses for prisoners. These courses aim at ensure inmates get a job and live a normal life when released.

National Human Rights Commissioner Chartchai Suthiklom, a former director general at the Corrections Department, said the right to a livelihood was a human right and thus the government should minimise any restriction of such a right.

He encouraged the Corrections Department to better inform society about life behind bars.

“When the public understands the environment at correctional facilities, public doubts about former inmates will be reduced,” he said.

Assoc Prof Dr Napaporn Hawanont, an independent academic, said she was worried that many more restrictive laws targeting former inmates would be introduced.