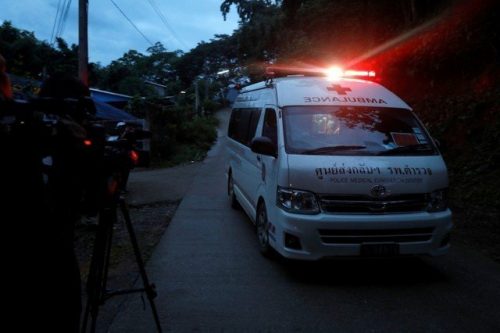 Boys on their way to hospital.

Chiang Rai Governor Narongsak Osottanakorn has said that four boys have been extracted from the cave so far and that the rescue mission has now be halted and may not resume until tomorrow.

Speaking at a press briefing shortly before 9pm on Sunday, Governor Narongsak said the first boy left the cave at 5.40pm, with the second coming out “10 or 20 minutes later”.

Two more boys left the cave at 7pm, he said.

All the boys have been taken to Chiang Rai Prachanukraw Hospital.

At the press briefing, Governor Narongsak said that it may be another 10 hours before the other boys start to leave the cave as they need to re-supply oxygen to the divers.

The boys, aged between 11 and 16, went missing with their 25-year-old coach after soccer practice on June 23, setting out on an adventure to explore the cave complex near the border with Myanmar and celebrate a boy’s birthday.

An Australian doctor who is part of the rescue mission checked the health of the boys on Saturday night and gave the all-clear for the operation to proceed.

It is not known when the rescue mission will resume.

We’ll update this post with more info when we receive it.