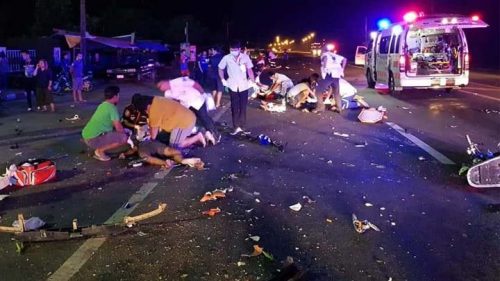 Horrific pictures showed the aftermath to a street racing event on the highway in Buriram.

Five motorcycles slammed into a red pick up that was braking and turning into the PTT gas station in Ban Yang district around 11.30 pm on Saturday night.

Rescue medics performed CPR at the scene that was utter carnage with bikes almost unrecognizable.

Three riders were pronounced dead at Buriram hospital by 1 am and  three more succumbed later on Sunday. One is still in a critical condition.

They were all aged between 15 and 17 and none of them were wearing helmets.

Witnesses confirmed they were racing.

Times comment:- It would be of some consolation if the tragic loss of life brings other young boys to their senses. Sadly, it probably won’t and this Friday and Saturday nights the road to the Chang Arena will see dozens of riders putting their lives and the lives of others at risk.

The police have to become more proactive and put a stop to it. Participants in road races should be forced to go to the morgue and see for themselves what victims of speed look like.

The Times Group sends its sincere condolences to the families of those who died.