The Good Face Of Football, One EVERYONE Should Read

This is a sad story about a very young Sunderland fan in England who is terminally ill. When social media broadcast Bradley’s tragic circumstances, the good guys came up with the goods. And there were MANY good guys in football, players, club officials and supporters all over the country.

Although we live thousands of miles from England, I would like to think this story is relevant to everyone, sports fans or not.

Locals in Sunderland were already raising money to help send Bradley to America for treatment that was not available in the UK. This is when Everton stepped in and donated 200,000  pounds and signed shirts shortly before they were due to play Sunderland at the Stadium of Light.

A few weeks later Bradley was a mascot at the Sunderland v Chelsea game where he was allowed to take a penalty against the Chelsea keeper, which obviously found the net.

He was also named on the teamsheet subs list in the proramme. The BBC also got involved and Bradley’s penalty won goal of the month. A fantastic gesture.

The following is what happened at Goodison Park tonight before the match against Manchester City. Everton had promised Bradley’s family he could come to Goodison Park as guest of honour in the return game against Sunderland.

Sadly, it is unlikey that Bradley would be able to fulfill that appointment. This is what Everton did. 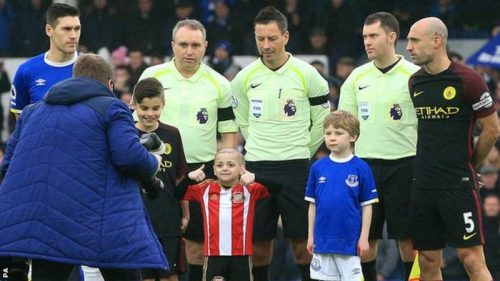 Bradley in his Sunderland shirt at Goodison Park.

A terminally ill five-year-old Sunderland fan has appeared as an Everton mascot for the visit of Manchester City in the Premier League.

Bradley Lowery, from Blackhall Colliery near Hartlepool, was cheered as he was carried onto the pitch by Toffees striker Romelu Lukaku on Sunday.

Before kick-off, Bradley kicked a ball into the Goodison Park net.

Bradley was diagnosed with neuroblastoma in 2013 but his mother has confirmed he “will lose his fight”.

In December, Gemma Lowery announced all three options presented by a consultant would not cure Bradley’s illness. Around £700,000 was raised to fund treatment in the USA.

Fans up and down the country took Bradley to their hearts, resulting in him receiving thousands of Christmas cards.

His appearance at Goodison Park was much anticipated, with travelling City fans holding aloft a banner stating: “Cancer has no colours, one Bradley Lowery”.

Former Everton midfielder Peter Reid said the youngster would “love” the experience in a tweet which also featured a banner inscribed with ‘there’s only one Bradley Lowery’.

When people are quick to accuse footballers and football in general of being only interested in themselves and money, then just maybe this will bring home that there are MANY people in football who care and do much that goes unrecognised.

This has not been easy to write as it’s another example of how life can be so unfair and very fragile. Also having been a primary school teacher, it hits very hard.

Thank you to everyone who has got involved in Bradley’s short life. This comes from a very sad Middlesbrough fan, Sunderland’s big rivals. But like the banner said, ” Cancer has no colours !”