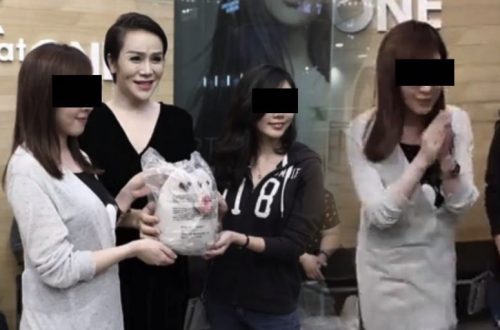 A drama at a famous Siam Square hairdresser salon was all the rage on Thai social media at the weekend.

At the centre of the drama was a person called “Jack” who is the owner of Phoenix at One.

She was mad that two Taiwanese ladies would not pay her staff for services received.

But one of the Taiwanese turned out to be a famous news anchor in her home country.

When Jack swiped out at her phone as she started filming during the altercation, the footage ended up all over Taiwan social media.

The Thais were then in the hot seat when they felt aggrieved themselves.

The story reached the national news and even the the Taiwanese embassy got involved.

Jack – real name Yanamornwat Jatkhong – was filmed talking in Thai and English. In English she mostly was referring to the two Taiwanese as having not paid.

But in Thai the hairdresser called them prostitutes using the Thai word “e-dork” on several occasions.

Finally she made to imprison the two Taiwanese girls in her shop as it was time to close up for the night.

The two customers did little to fight back spending most of their time texting.

The situation was resolved when the news anchor – named later as Bee-Bee – paid up the 250 baht.

The argument was over a staff member using cool water on the customer’s hair and the price they had to pay.

Later, the two customers went to the shop to present a stuffed toy and say sorry.

Just another example of a “famous” person throwing a strop because they are full of their own self-importance. It’s amazing that they don’t seem to mind the fact that they are making themselves look ridiculous.

Still, she will probably be more than happy to have had the exposure. What’s the expression? “There’s no such thing as bad publicity !”