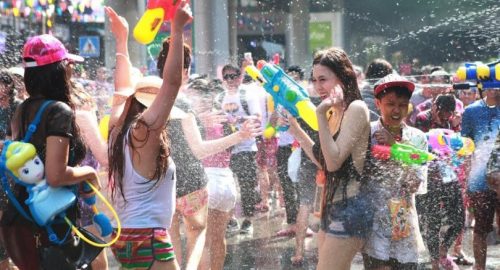 A report submitted to the Thai Interior Ministry claims that more than half of all women are subjected to sexual molestation by drunk men at Songkran.

Claims have been made that the celebration is out of control mainly because of men and alcohol.

Calls have been made to protect women, young people and children from the drunken and dangerous revelry that now typifies the Thai traditional New Year celebration.

Writing on behalf of thirty victims of sexual assault Jadet Chaowilai said that Songkran was out of control as drunks and opportunists used the cover of the celebration to assault and grope women, cause arguments and injure people.

Songkran also resulted in loss of life in road accidents with drunks taking to vehicles.

Jadet sent the letter to Sutthipong Juncharoen in charge of protecting the public at the Interior Ministry. Demands were made for action to protect the public and start campaigns to reign in the celebration.

Victims also gave their impact statements about what happened to them in tourist areas of Bangkok.

Jadet, on behalf of several organizations promoting the interests of women and young people said that in a 2016 survey of 1,793 women and girls aged from 10 to 40 85.9% of respondents said that measures should be put in place to protect females at Songkran.

A staggering 51.9% said they had suffered some form of sexual harassment or molestation.

“A” was typical of those. She said that she went to Khao San Road with her son and daughter in law. A drunk man came up to her to put powder on her.

But he grabbed and fondled her breasts. She felt terrible but made no complaint at the time fearing trouble if she spoke up.

Instead she said to her family that they should immediately go home.

“That was the end of Songkran for me,” she said “I learned my lesson”. She added that as they were leaving she heard the screams of another woman who was being molested by the same man.

An 18 year old named only as “B” recounted a similar story about how a drunk man bent down and tried to kiss and grope her during the celebration.

Others spoke of being forced to drink alcohol in the name of fun.

The organisations are calling on the Interior Ministry to step up measures to protect women as this year’s Songkran festival looms in three weeks’ time.

They want to see the authorities out in force, volunteers mobilized and campaigns conducted to encourage acceptable behaviour.

Principally they see alcohol and its misuse as central to the trouble at Songkran.

In a Banmuang report on the handing over of the letter the ministry were urged to make Songkran safe and fun for locals and tourists alike.

Values of Thai-ness celebrating Songkran as traditional and friendly should be promoted by the authorities.

What were called “Community Checkpoints” should be set up to encourage correct behaviour on the roads.