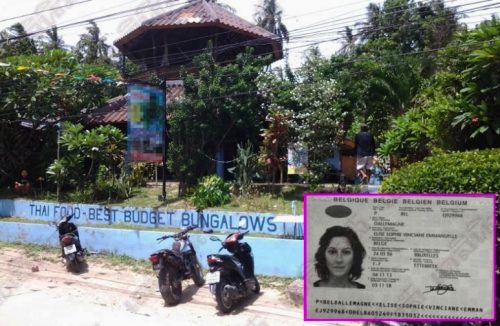 A popular website was saying there had been a cover up by Thai news media in the death of Elise Dallemagne from Belgium.

And they said that the mother of the victim was demanding a proper investigation and that she suspected her daughter had been murdered then made to look like she had hanged herself to cover up the crime.

The latest claims are bound to add fuel to the fire with some having dubbed the holiday isle in Surat Thani in Thailand’s south as “Death Island” after two high profile murders and other mysteries.

Daily News published a page from the victim’s passport that showed she was 31 not 30 as previously written. She was listed as being from Brussels.

She was found hanged following a fire at the bungalow where she was staying on the other side of the island.

According to Daily News Chokchai Sutthimek leading the case for Koh Tao police was sticking to his version that the victim was found hanged on Tuesday and had probably been dead since the 23rd or 24th.

The Belgian embassy has been informed and the mother contacted but she believes that her daughter did not take her own life and was in fact murdered.

She was believed to be en route to collect her daughter’s possessions.

Several young people have gone missing in mysterious circumstances on the island where two British nationals were found slain, a crime for which two Burmese men were convicted and are on death row.

Known as the B2 many believe them to be innocent and that the island harbours a dark secret.