“Most Hated German In Thailand” Is Now Targeting South Korea 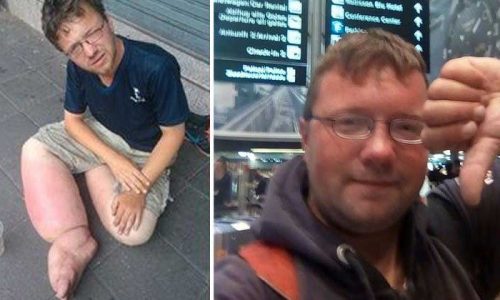 Not a popular German. (Photo:-Sanook)

A reprobate beggar who conned the Thai people with a sob story taking their money to spend on booze and women has now turned up in Seoul.

Benjamin Holst – who has a swollen leg that he uses to garner sympathy and donations – was blacklisted from Thailand three years ago.

Now he is doing his best to anger the Thais again.

This week he was refused boarding by Thai Airways in Zurich. This prompted an outburst on Facebook that included the comment:

So he got on a KLM flight in Amsterdam instead and flew to South Korea.

Three years ago the Thai immigration deported him after a series of stunts. He first appeared begging in Khao San Road.

He managed to get the sympathy of the Thais and got 50,000 baht in donations after claiming his wallet and documents had been stolen. Then he blew most of that money on women, booze and cigarettes in Pattaya.

He angered many when he said that the Thais were stupid for believing him and giving him money.

Police in Pattaya finally had enough of his antics and, after fining him for annoying the public, handed him over to immigration and he was sent packing from the kingdom in September 2014 and blacklisted.

But despite a change of appearance it looks as though Holst – given the moniker of the most hated German in Thailand – is still trying the same scams.

He is now fatter, with fair hair and glasses but the modus operandi is the same.

He posted from the Nostalgia Hotel in Seoul that he had “checked in and was going looking for girls.”

Challenged by online posters that he was back to begging in Asia he said:

“Money is easy to get. I just put my cup out and within one or two hours I have got $200 US dollars.

Whether he makes an effort to try and get to Thailand again remains to be seen.