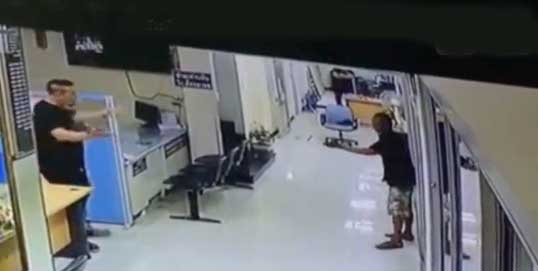 It is a situation that in many countries may have ended in a shooting of an assailant. But at Huay Kwang police station a potentially violent situation ended in a big Thai bear hug

A 45 year old man had entered the station on Saturday night brandishing a knife with the situation caught on CCTV that was later shared online.

The hero of the hour was officer Anirut Malee who, rather than escalating the incident, talked reasonably to the clearly stressed man.

Anirut said: “He used to be a musician but had been working as a security guard for three days and had not been paid. On top of this he had had his guitar stolen and it was all stressing him out.

I heard him out and sympathized and said I had a guitar to give him, and suggested we go out for a meal together. We were conversing in Southern Thai dialect”.

Following his calming actions the man handed over the knife. Anirut threw it to one side and gave the man a big hug which was all caught on camera.

The cop was praised for his sensible actions online.

The man who was not named was sent to a hospital for an evaluation of his mental state.

No charges were reported.