Hold up at Seven Eleven In Thalang 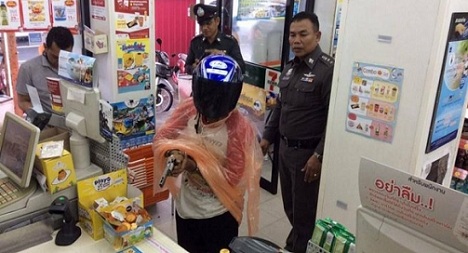 Police in Thailand continue to reenact crimes for prosecution despite humanitarian protests.

The staff, working the night shift, were caught unaware when the gun slinging robber entered and demanded the money from the till. He chose his moment when there were no customers in the store and walked in dressed in black trousers, an orange raincoat (some sort of camouflage we would presume) and a black motorbike crash helmet to conduct the late night/early morning robbery at 4:17 am. “He pointed a handgun at the cashiers and threatened to shoot them if they did not hand over the money from the register,” said Capt. Kraisorn.

“They told him that the register wouldn’t open unless he made a purchase. So, he grabbed a loaf of bread and asked them to enter it as a sale,” said Capt Kraisorn.

Once the cash till was opened, they gave him all the money, which was 4,100 baht. He then quickly ran out of the shop forgetting his loaf of bread.

Witnesses outside the store told police that the man ran into the fresh market about 50 meters away from the store. Police later found his stolen raincoat and crash helmet dumped behind the market place. The suspect was captured at 5 pm yesterday. Thalang Police tracked him down using CCTV footage from cameras in the area, which showed him going back to his rented room about 2 km from the store on Thepkrasatrri Road.

The suspect, Kumafaisol Kuborsu, 25, from Pattani, was caught with only 2,000 baht in his possession. He told the arresting officers that he had already spent the rest,” said Thalang Police Chief Col Sompong Thiparpakul.

Kumafaisol had previously served a sentence for drugs in 2011. He had also recently been fired from his last job as a “SECURITY GUARD” (God/ Buddha help us) at a company in Patong for repeatedly showing up late.

“He confessed to the robbery, adding that he desperately needed the money because he had no source of income. He was charged with robbery,” said Col Sompong.

One comment on “Hold up at Seven Eleven In Thalang”