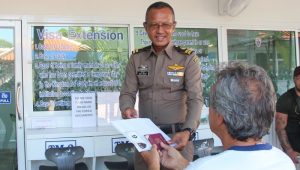 A foreigner hands in his application at Phuket Immigration. Photo: Tanyaluk Sakoot

The rest of the “new” provisions have already long been in use, explained Phuket Immigration Deputy Chief Lt Col Archeep Jaroensuntisuk.

“Phuket Immigration has received the order to introduce the new rules. The order was issued on Jan 18, and the new rules will come into force on March 1,” he said.

Under the new provisions, applicants for an extension to stay in the country temporarily on a Non-Immigration O-A visa – technically just another “permit-to-stay”, but specifically for retirees – must be at least 50 years old, Col Acheep noted.

“They must have entered the country on a valid Non-Immigrant visa and are currently allowed to stay in Thailand on a valid permit to stay,” he said.

Of primary concern is the confusion over the financial requirements, which Col Acheep stressed that applicants have to satisfy only one category.

Overall, the three main financial categories that applicants can apply under a mandate that the applicant must prove that all monies in hand – either received as income throughout the year or already in the bank, or a combination of both – totals at least B800,000.

“Under the income requirement, applicants must receive at least B65,000 per month,” Col Acheep explained.

As many embassies no longer issue affidavits confirming income, this is no longer required, he said, noting that letters from governments and pension fund providers will be accepted along with other forms of evidence to prove the income pending.

“Of course any financial statements from banks and copies of bankbook records proving this income already being received should be provided,” he said.

Alternatively, applicants can show they have B800,000 in a Thai bank account.

“Under the new rules, the B800,000 must be in the account at least two months before applying for the visa (permit to stay) and must remain in the account for at least three months after the visa has been issued,” Col Acheep said.

Again, financial statements from the relevant bank and copies of the bankbook are required in proving the funds are actually in the account, he added.

“After three months the foreigner can start withdrawing from the account, but under the new rules, the balance in the account must not go below B400,000 at any time throughout the year,” Col Acheep explained.

Asked what happens to applicants who are discovered next year dipping into the account, bringing the balance below B400,000, Col Acheep said, “Just don’t do it. Keep it at B400,000.”

The third – and likely most popular option – is to have B400,000 in a Thai bank account and receiving monies throughout the year that altogether total at least B800,000.

The same statements, letters and copies of bankbook records as needed for the first two options are required when applying under this option, Col Acheep explained.

Stunningly, under the new order the old provisions that people who have been living in Thailand for continually on a retirement visa since before Oct 21, 2008, can still apply under the exact same conditions that they were first approved.

Under this “grandfather rule”, applicants who are over 60 still only need to show that they either have B200,000 in a Thai bank or receive at least B20,000 income per month.

Likewise, applicants under the same grandfather rule who are 55-60 years old can apply to show that they have B500,000 in Thai bank account or an income of B50,000 a month.

For these people there is no option to provide a combination of monies to reach any special target, Col Acheep explained.

They must have the money in the bank or receive the required monthly income; they cannot add them together to try and reach any special figure, he said.

However, there is no minimum balance required to be kept in a Thai bank account, he noted.

The Jan 18 order, issued by Immigration Bureau Deputy Commissioner Maj Gen Sarayut Sangonpokai, also made special mention that the new provisions specifically do not apply to:

– People who have Thai families

– People whose spouses have (recently) passed away

Regarding the exceptions for people who have or are supporting Thai families, Col Acheep explained that the retirement visa may not be the best option for them.

“If you believe you should be on one of these other visas (for supporting Thai families), then please come in and see us so we can explain which visas are available and what is required to be issued them,” he said.

Regarding the exception for “people whose spouses have passed away”, Col Acheep admitted, “We are still not sure exactly what this means. We are waiting for Bangkok to clarify that to us.”

However, he again stressed, “If you think this particular clause applies to you, it is best to come and explain your circumstances to us so we can explain what visa options are available.”

“A retirement visa is an option that foreigners can choose for themselves,” Col Acheep said.

“I just want foreigners to understand the updated immigration policy. There are very few changes, mainly just the B400,000 minimum bank balance requirement – the rest is making the rules clearer,” he said.