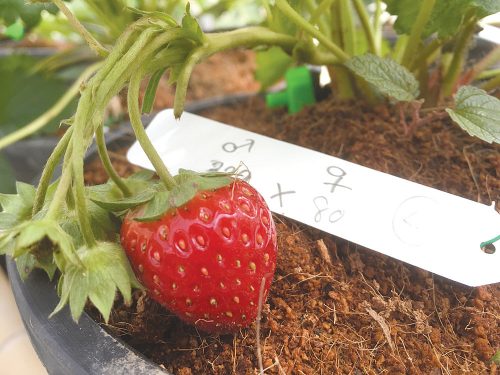 A new research project is hoping to develop a strawberry with enhanced taste and also health benefits.

“We are in the process of boosting anthocynanin in our strawberries. The prospects are very good,” said Narongchai Pipattanawong, the marketing director of the Royal Project Foundation.

Anthocyanin has antioxidant and anti-carcinogenic properties and the project is expected to produce satisfactory results within the next two years.

Apparently, some Italian varieties contain a significant amount of anthocynanin but they did not grow well in Thailand’s weather conditions.

As a result, the Royal Projects Foundation and the Thai Research Fund (TRF) have jointly funded the research project, which is being conducted by a Naresuan University’s doctorate candidates, to develop a strawberries that will contain a relatively high amount of anthocynanin and also blossom well in Thailand.
Asst Prof Dr Peerasak Chaiprasart, who heads the university’s Centre of Excellence in Post-harvest Technology, is the researcher’s adviser.

He said that they have already come up with the variety that contains the desirable qualities, but they are still experimenting with it and can’t disclose details at the moment.

However, he did say that this variety would deliver 100 milligrams of anthocyanin per strawberry. With such an amount, it is hoped that this strawberry will be able to combat cancers.

Assoc Prof Prasert Pavasant, PhD director of the Research and Researchers for Industries programme at the TRF, said the ongoing research was very successful.

The new strawberry variety has been crossbred from six varieties including the Phrarachatan 80,50, 70 and 72.

Many strawberry varieties in Thailand are in the Phrarachatan line, which was developed in response to an initiative by the HM King Bhumibol Adulyadej.

In a bid to stop opium growing and mobile plantations among hilltribe people in the North, the late King recommended that they try growing strawberries instead.

His Majesty had kindly supported strawberry-variety research and development. So, new varieties from researches are known as Phrarachatan.

The first variety of the line is known as Phrarachatan 16. The last strawberry variety named by Rama IX, who passed away on October 13, is Phrarachatan 88.

Yuttana Bamrungkhiri, a Hmong-ethnic farmer in Phetchabun’s Khao Kho district, has grown Phrarachatan 80 to attract tourists during the past five years. “It generates profits of Bt350,000 over the five-month strawberry-blossoming period,” he said.

He said that he allowed tourists to wander around his strawberry plantation and pick fresh fruit. Many other locals have also opened their strawberry farms to tourists.

Yuttana feels grateful to the late King for caring about hilltribe people’s wellbeing.

“Thanks to him, we don’t have to stick with opium growing, which is illegal,” Yuttana said. “We feel particularly grateful because he loved his people including us, the hilltribe ones.”