How To Kick The Booze Habit ? 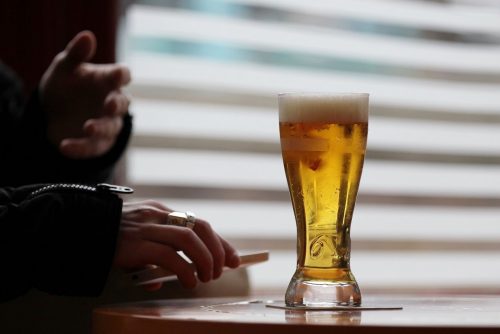 Want to give up the booze?

The Mental Health Department’s Alcoholism Centre has urged people who intend to stop drinking alcoholic beverages during the upcoming Buddhist Lent period (July 28 until mid-October) to make a start by reducing alcohol consumption gradually instead of an abrupt cessation.

Going cold turkey on alcohol can cause symptoms such as shaking, shivering, irregular heart rate, sweating and insomnia for people who are long dependent on booze. During the 3-4 days into the withdrawal, one could also suffer from confusion, delirium, seeing or hearing things other people do not, or seizures, Mental Health Department director-general Dr Boonreung Traireungworarat warned. (Sounds like it’s exactly the same as drinking it !!!)

He suggested that those who intend to stop drinking during the upcoming Buddhist Lent period should start by reducing their alcohol intake now so as to prevent withdrawal side-effects. He also urged them to see a doctor before they completely stop drinking, in order to get prescribed medication for alcohol dependence so as to lessen withdrawal symptoms.

A recent survey by the department found that 1.8 per cent of Thais over 18, or about 900,000, were alcohol-dependent hence an Alcoholism Centre has been set up at Chiang Mai’s Suanprung Psychiatric Hospital to conduct research and set up treatment guidelines for alcoholism patients.

Hospital director Dr Thoranin Kongsuk, who is in charge of the Alcoholism Centre, suggested five points to ensure effective cessation of alcohol dependence:

1 Set a clear goal for what they are kicking the drinking habit and a specific time frame to cease drinking;

2 Those in regular contact with alcohol-dependent people must boost their self-confidence and show them good values in personal life, family and work;

3 The family of an alcohol-dependent person must be understanding, sympathetic and accepting while encouraging him/her to stop drinking to convey to them that they are not alone in fighting this battle;

4 Those surrounding an alcohol-dependent person should keep him/her inspired to stay sober longer and longer, commending the milestones achieved;

5 An alcohol-dependent person should forge a bonding with family, friends, neighbours, clubs/foundations who could get him/her overcome the habit.

Boonreung also urged that people wishing to quit drinking or suffering from mental problems due to drinking could seek advice through the department hotline 1323.