Humans Must Learn To Live With Wild Elephants Expert Warns 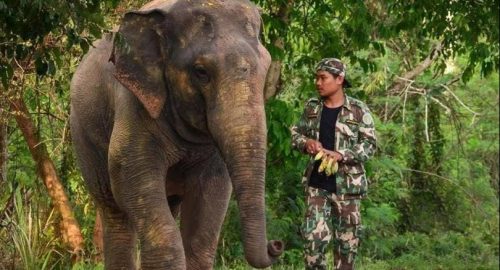 Forest preservation measures and a better understanding of animal behaviour will help find a sustainable solution to the problem of crop destruction by wild elephants, according to wildlife experts.

There have been several reports in the past month of wild elephants encroaching on farmland near the forest, especially in the Eastern Region, destroying crops and sometimes hurting people and damaging personal belongings.

The National Parks, Wildlife and Plant Conservation Department (DNP) said this is because the elephants have been forced to expand their territory as they search for food. And the World Wildlife Fund (WWF) suggests that local people learn to benefit from the presence of elephants and help to preserve the forest to stop conflicts between animals and humans.

Kanjana Nitaya, DNP Wildlife Conservation Office director, said there were about 3,500 to 4,000 elephants roaming the forest of Thailand and the number is increasing due to conservation efforts. 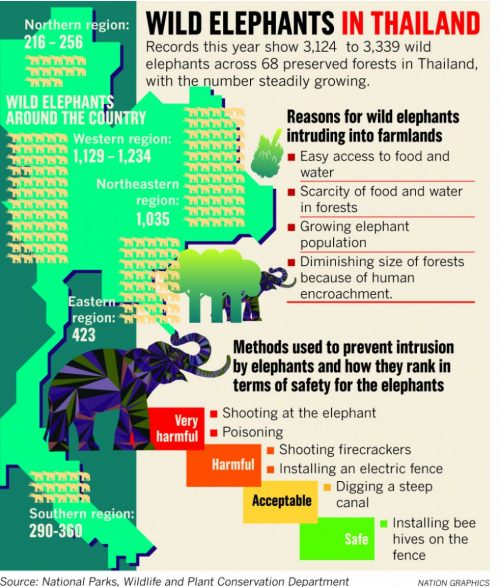 While this was a good sign that wild elephant conservation was successful, Kanjana said that limited food and water sources in the forest, combined with human encroachment, put the elephants under pressure. This led to them straying into farms to find new sources of food.

“The department acknowledges the growing conflict between the people around the forest and the wild elephants,” she said. “We have worked for quite a while to solve this conflict and to find a way to let elephants sustain themselves, but this task also needs cooperation from the local people.”

She noted that the wild elephant population in Khao Ang Rue Nai Wildlife Sanctuary had increased up to 7 per cent.

“We have seen many people have taken severe measures to stop elephant encroachment, by constructing electric fences or shooting at the elephants, which can kill them.

“This is not a good solution and we are trying to foster a good understanding among the people and work with them in other constructive ways,” Kanjana said.

One preliminary solution involves DNP officers working with local volunteers to monitor wild elephants, warn about encroachment and chase the elephants back into the forest.

The DNP has also developed a more effective way of containing the elephants and stopping them from damaging crops by installing bee-hive fences. When the elephants approach the fence, the bees chase them away without causing any harm to the animals.

The department also plans to grow food for elephants in the forest.

WWF conservation manager Gordon Congdon, meanwhile, suggested that to solve the conflict with elephants in a sustainable way, people must understand the animals’ nature and learn to live with them.

“One good way is to let the people gain a profit from the elephants,” he said.

“For instance, at Kui Buri National Park the local people have a new income through eco-tourism, as many tourists visit the area to see wild elephants.”

For areas where the problem is severe, including the Eastern Region, Congdon suggested a further study of elephants and their habitats through the use of GPS tracking collars.

Kanjana emphasised that human activities were often to blame for elephants leaving the forest in search of food.

“We are also encroaching into forest, making it harder for the elephants, which already face limited food sources. Therefore, it is our task not to invade their homes,” she stressed.

Congdon added that the heart of wild elephant conservation is to save their habitat and make sure that they can survive in the forest.

He noted that the preservation of the forest corridor is also important, because it will allow elephants to migrate, find new sources of food and preserve their gene-pool diversity.