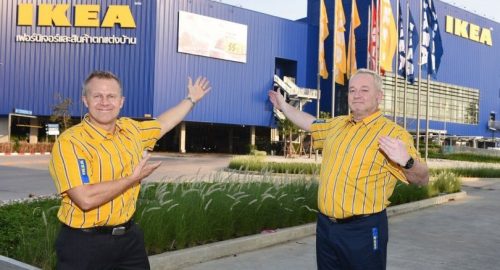 IKANO Private Ltd, which operates IKEA stores in Southeast Asia, yesterday announced an ambitious plan to open one store every year in the region over the next five to 10 years.
The company yesterday officially opened its second IKEA store in Bang Yai district of Nonthaburi province. Costing Bt6.3 billion, the store in CentralPlaza WestGate is the largest IKEA outlet in Southeast Asia, occupying 50,278 square metres of retail area and stocking 8,000 products

Christian Rojkjaer, managing director of IKEA Southeast Asia, said that Thailand is one of the company’s strategic markets for its store expansion in Southeast Asia.

He said that the company first looked at opening a store in Bangkok 10 years ago. However, the IKEA Bangna outlet opened about five years ago.

“Our new IKEA store in Bang Yai is the 415th IKEA store opened around the world,” Rojkjaer said.

“We now have seven IKEA stores in Southeast Asia, comprising Singapore, Malaysia and Thailand. We’re working on the opening of IKEA stores in the Philippines and Vietnam.”

He said that company will open a store in Penang, Malaysia, in 2019, while the first IKEA in Manila will be opened in 2020. This would be followed by Ho Chi Minh City or Hanoi by 2022.

“We have seen great potential for the growth and future expansion of IKEA stores in particular markets in Southeast Asia, driven by many positive factors, especially the growing middle-classes and the equalisation of people in the region,” Rojkjaer said.

Rojkjaer said that for Thailand, about 10 more IKEA stores will be opened within the next five to 10 years, of which two will be large stores and the rest will be small-format outlets, or so called pick-up and order points (POPs).

The first POP outlet opened in November 2016 in Phuket, occupying 2,615 square metres in retail space and costing about Bt175 million.

“We are looking for other potential locations in Bangkok, especially in the northeast and southwest areas, for the opening of IKEA stores,” Rojkjaer said. “We are also looking for upcountry locations, such as in Udon Thani, Chiang Mai, and Pattaya, for the expansion of our small-scale POP outlets.

“There are fantastic opportunities for IKEA and Thailand to grow together, thanks to the increasing number of small manufacturers for furniture and home accessories owned by Thai entrepreneurs.”