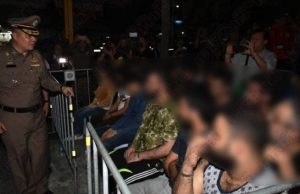 There was no let up in the Thai immigration drive to rid the country of people on overstay and those who have entered the kingdom illegally.

Daily News reported that there was a Valentine’s Day roundup at 220 places resulting in the arrest of 522 foreigners.

These were mostly migrant workers on overstay or who had entered illegally.

Various workplaces, hotels and flats were raided in the sweep.